In Its continuing crackdown, Bangladesh has captured one more ULFA leader on its soil on Saturday. According to a section of Bangldesh media, Rapid Action Battalion arrested ULFA leader Ranjan Chowdhury along with one of his Bangladeshi associates in Bhairab upazila of Kishoreganj early in the morning.

An team of the elite force with the help of Rab-9 conducted an operation in Laxmipur area and captured the ULFA leader and his associate Pradip Marak, 55, of Sherpur. A pistol, one revolver, four bullets, four bombs and some bomb-making materials were also found in his possession.
They were taken to the Rab headquarters hours after the arrests. The Rab director said the drive was conducted on information of illegal infiltration into Bangladesh territory by the Ulfa leader. Sources say that Ranjan got married at Jinaigati upazila in Sherpur in 1998 and had been illegally living there since then. 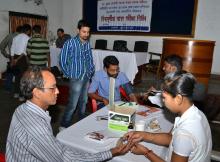 28 Oct 2008 - 3:13am | editor
Deepawali is the festival of lights which is celebrated all over India . It marks the advent of the winter season and signifies peace and prosperity and the victory of truth over evil. This year's...