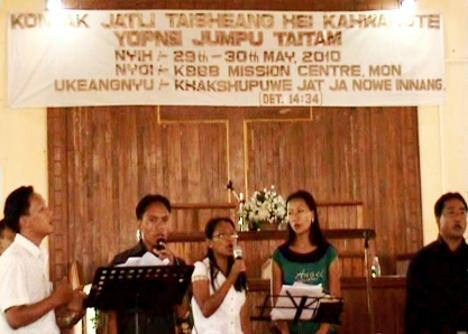 The programme was atteneded from every nook & corner of Konyak Clan, such as all the Anghs, Village Council Chairmans, Legislative members (Konyak), Senior Citizens, Konyak Nyupuh Seko khong (KNSK), Advisory Boards & Units Presidents, Ordain Ministers, KBBB Executive Commitee and all the pastors from within the Mn District.

The programme is organised mainly for to maintain peaceful Co-Existence among the general public, political leaders, NGO's heads and the nation workers within the Konyak land whereby to pave a way to built a atmosphere of peace & tranquility,progress & development & communal harmony.

18 Jan 2018 - 2:22pm | AT News
NEW DELHI: Nagaland and Meghalaya are simultaneously going to the assembly polls on February 27 since the current assembly terms for both the north eastern states are expiring in March....