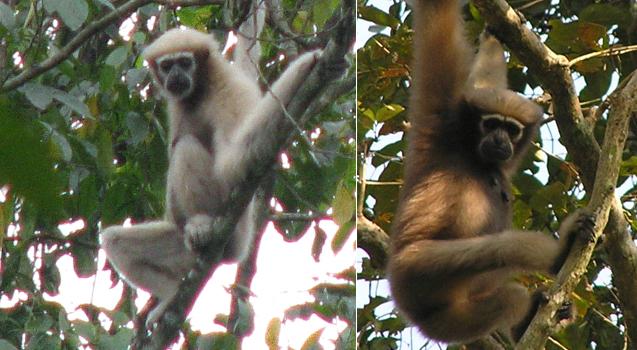 Assam has been found to be the state with the highest diversity of non-human primate species in India the after a survey team lead by Aaranyak’s primatologist Dr Dilip Chetry has stumbled upon Eastern Hoolock gibbon (Hoolock leucondys) in three reserved forests of Sadiya sub-division in Tinsukia district of the state.

Before the Hoolock gibbon survey was undertaken, the North East India was known to harbour 11 species of non-human primate out of the total 25 species present in India. Out of those, nine species were confirmed to be present in Assam.

However, the present study reports that the Assam actually has 10 species. The extensive Hoolock gibbon survey was carried out in the month of March-May, 2010, in the reserve forests of Sadiya subdivision in Tinsukia district of eastern Assam. The survey was jointly carried out by the Zoology department of J.N.College, Boko and the Gibbon Conservation Centre, Marinai under the leadership of Dr Dilip Chetry, primatologist of Aaranyak, in collaboration with Assam Forest Department, especially Sadiya Range. The Primate Conservation Inc., USA supported the programme.

The survey team not only sighted Hoolock gibbons but also subsequently identified the same as the Eastern Hoolock gibbon (Hoolock leuconedys) on the basis of scientific observations and research. The pelage colour differences which distinguish it from the Western hoolock gibbon were confirmed through binoculars and photographs. Their identity was further authenticated through a review of recent literature and through personal correspondence with Prof Colin P Groves (Primate Taxonomist).

Dr Chetry also mentions that there are more than 23 groups of gibbon in Sadiya region on north bank of river Lohit. This study has marked Kundil Kolia RF as a potential conservation site for the species. This being the sole population of the species in Assam , the Kundil Kolia RF can be upgraded to a Wildlife Sanctuary under the name “Kundil-Kolia Wildlife Sanctuary” for conservation of the rare eastern hoolock gibbon in the state.

The survey has found forest loss and fragmentation due to expansion of agricultural activities such as ginger and mustard cultivation ; encroachment by human settlement and illegal felling of trees, as the most discernible factors posing grave threat to survival of the gibbon in this area.

Dr Chetry has prescribed for a detailed strategy action plan is needed for the future conservation of the species even as he raised concern over unabated encroachment on forest areas by neighboring Arunachal Pradesh that has resulted in conversion of more than 4000 hectares of forest land into agricultural field.

The study team has noted with concern the grossly inadequate manpower strength of Forest Department in Sadiya Range. Only eight forest personnel have to patrol the entire forests cover of the sub division while there exists no camp inside the forest area.

Permalink Submitted by Jayanta Kumar Das on Sun, 16/05/2010 - 02:20
Thank you Jayanta for bringing us the untold reality.So much to be discovered in Assam it self;but who cares!

Permalink Submitted by Shrish Mammattv... on Thu, 03/06/2010 - 22:38
It is amazing that team has found the uncover species of Hoolock gibbon. I want to give congratulations to the team who carried out this survey. Shrish M Bajpai, Chennai.

Permalink Submitted by Dr. Sadiqul Hussain on Tue, 08/06/2010 - 03:27
Once I have obsereved five non-human primate species at Barekuria, near Tinsukia. All are black in colour. I filmed their activities. It appears that they are from one family. They are quite friendly with the local people and when offered banana and other fruits they received it without showing any fear. Is this small family also belongs Hoolock gibbon ?