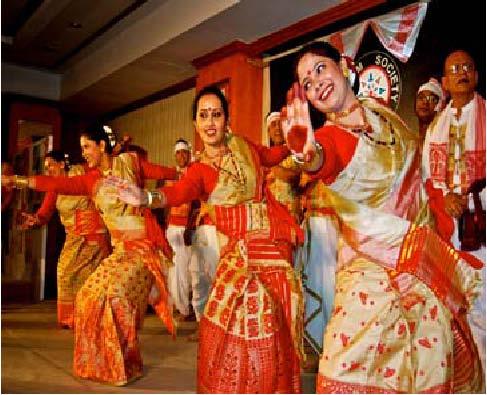 This year a record of over 250 people gathered at the Metropolitan Palace Hotel Dubai for a cultural evening featuring popular guest artistes from Assam as well as local pool of talents from UAE. The guest artistes to have graced the occasion coming all the way from Assam were Jayanta Nath, Monisha Bordoloi, Prijya Hazarika and Prayashi Bora.

The Chief Guest for the Program was Mr. Sanjay Verma, the newly joined Consul General of India based in Dubai. The Consul General accompanied by his wife Mrs Sangita Verma, congratulated the organizers for the excellent display of traditional Assamese attires, food items as well the rich cultural heritage of the State. Senior Dubai resident Aswini Borkotoky, welcomed the gathering on behalf of the organizers, Assam Society, UAE. The guests were felicitated with the traditional gamosa and souvenirs.

One of the star attractions of the grand evening was noted Assamese Singer, dancer and musician, Mrs. Monisha Bordoloi, who enthralled the audience with new songs as well as popular songs from yesteryears including lilting Bihu songs.

Another star attraction of the program was the guest artiste Jayanta Nath from Jorhat. Jayanta Nath, a singer, composer and music director, entertained the audience in his inimitable style with a variety of Assamese and folk songs, with the audience literally dancing to his tunes. This is the second time, after his performance in Dubai in 2006, that Sri Nath appeared in the Bihu Celebrations of the Society. Sri Nath also inaugurated his new music album entitled ‘Manabata’ in the same program.The duo of Jayanta Nath and Monisha Bordoloi also put up an impressive joint performance which took the show well past midnight to the joy of those present. They were supported by Partha Goswami, Sumon Bordoloi and Arindam Baruah in background scores.

Instrumental Numbers by Prayashi Bora, Guwahati The cultural function got off to an early start with ‘Okonir Mel’ where the tiny‐tots had the opportunity to display their talents in different areas. All the young participants received gifts in order to encourage participation in future events and also carry on the tradition of Assamese Culture. Children were also given away prizes for participating in the Drawing Competition organized in Dubai and Abu Dhabi on the eve of the Bihu celebrations. Mr. Amiruddin Ajmal, head of Dubai and Assam based Ajmal Perfumes Group, distributed the prizes.One of the highlights of the program was the very lively Hussori performance. The hussori troupe was led by Partha Pratim Goswami and supported by Sumon Bordoloi, Dayananda Gogoi, Bibhuti Brata Sharma, Sandeep Bhagowati, Dipak Tumung, Iswar Prasanna Das, Tandeep Bhagowati, Shyamoli Pathak Bora, Dimple Bhagowati, Sumana Bhuyan and Suman Khaund Baruah.

The eventful evening also witnessed the formal launch of the new look website of the Society at www.assamuae.org . Also launched was the new logo of Assam Society, UAE – designed by Mrs. Sumana Bhuyan.The dinner organized at the hotel premises had Assamese flavor too – with helpings of Rou Fish Fry and Kawoi Fish curry.This is the 12th year that the Assam Society, Dubai, has organized this event, having started off way back in 1999 with a two day outdoor programme at the Bin Majid Beach Resort in the Emirate of Ras Al Khaimah.

For the first time for a Bihu Celebrations, several competitions were organized this year – including ‘Sriman‐Srimoyee’ Contest – best attired male and female from among the audience, Food Mela – a competition to recognize best ethnic food/ snack preparations, Okonir Mel – to spot and encourage young talents from among the community. Food Mela saw a huge response from several expert cooks who prepared authentic and delicious Bihu specialities...the young generation participated actively in Okonir Mel and the Painting Competition...a handful of secret judges selected Sriman and Srimoyee 2010. 1st and 2nd prize winners in male category were Tonmoy Barooah and Rajesh Goswami respectively, whereas in the female category Yasmin Hazarika was the winner and Deepika Kataky was the runners'up.Also on display on the venue were traditional dresses brought all the way from Assam – courtesy Fabric Plus, Guwahati and handcrafted dresses by Mrs Phunu Dutta of Abu Dhabi.The event was organized successfully with a host of active members from Dubai, Sharjah and Abu Dhabi ably led by Anupal Phookan.

Permalink Submitted by Biraj Das on Tue, 15/06/2010 - 16:52
Hello to all UAE Axomiya Raij, I came to Abudhabi for 2 day official visit starting from yesterday, I am working at Bahrain Oil Refinery. Originally from Guwahati. Really glad to read the article about Rongali bihu celebration here this year. My best wishes to all of YOU. Regards Biraj birajda@gmail.com

Permalink Submitted by Raja Barkataki on Tue, 24/01/2012 - 17:28
Hi & Belated Happy Bihu to all of you. Myself i am staying in Sharjah for past 3 month & extremely happy to read this article n eager to be a part of this society. If anyone can help me get the contact numbers will be a great help. With Best Regards, Raja raja.barkataki@hotmail.com 0557576191

Save Saleki and Dehing Patkai Elephant Reserve from coal mining

19 May 2020 - 6:31pm | AT News
The Dehing Patkai Elephant Reserve - of which Saleki is a part - is the largest rainforest of India. Referred to as the "Amazon of the East", this virgin forestland stretches for 575 square...

12 Apr 2013 - 5:12pm | AT News
One more rhino lost its life at the hands of the poachers in Kaziranga. The poachers managed to flee with the horn. Forest officials spotted the dehorned carcass at Agoratoli range on Friday....