Bihu Songs: lifeline of an Assamese by heart 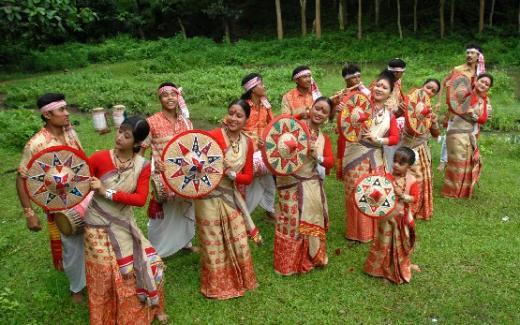 The Bihu songs are true reflection of love, passion and zeal of life in totality of a common Assamese person on day to day basis. Its importance can easily be felt by us on how these songs are integral parts of their daily life-cycle much ahead of Bihu festival and it remains on their lips even after Bihu is formally over. With each passing day the beautiful moments of Bihu kept haunting in our memory and it gives energy to complete our task in hand. The wait period for next Bihu makes us to have patience in our general life by believing ourselves and it is worthy to wait for every glorious time coming towards us with finger crossed instead of getting panicked in tough situation of life.

Primarily the love songs caters to the need of younger group where the lady love not only made ‘Gamacha’ by humming these songs, but they eagerly wait for him to come back to home on Bihu, else there is no meaning of her being attending Bihu based dance competition in the locality. So, no wonder Bihu is the occasion when an Assamese working outside the state try his level best to return back to his village even if it is for the short period. With the arrival of spring season when the Koyal begins singing melodies in remembrance of his partner, how the man can stay away from the romantic feeling of Bihu songs around Rangali / Bohag Bihu.

For an outsider like me the medium to familiarize with Bihu songs are available only through regular or especially launched Bihu VCDs in local market, but the magic of Bihu songs are much beyond that available in Husori team performance, Bihu Kunwari/ Sundari competition in every second locality and group Bihu done exclusively by woman team. As Bohag month is considered very mood booster and falling of Bihu with its fertile peak, no wonder both men-woman wanted to flow themselves in the seasonal power of erotic sentiments. As the male operates his Dhol to please his mate, his female counter-part too eagerly waits for dancing to his slow rhythmic, romantic but erotically attractive Bihu tunes till next dawn.

Its popularity can easily be felt beyond the geographical boundaries of Assam by witnessing the similar Bihu songs-dance program not only in other states in our own country but an Assamese by heart is celebrating it on foreign lands too, which once again establishes that root of Indian cultural heritage has not lost its way to preserve our identity, but it is indeed part of our daily life. So, despite all the modern life-style merely knocking of Bihu and its ever-green songs at our ear-drum ignites an erotic feeling and it will lead our life where Bihu songs keep us moving on all front much after the spring season forever.

Permalink Submitted by bishwajeet sinha on Mon, 12/04/2010 - 18:52
Thanks Simanta 4 ur rectification ! Its an attempt 2 under-stand Bihu songs by non-Assamese person. Hope u will take it in +ve sense.

21 Mar 2014 - 9:23am | AT News
Several political heavyweights are set to file their nomination papers on the last day on Friday for the first phase of Lok Sabha poll slated for April 7.They include BJP state president Sarbananda...

4 Jul 2008 - 10:39pm | editor
Morigaon CPI leader Manoj Deka who was struggling with death at the Guwahati Neurological Research Centre died on Friday morning. Doctors at the GNRC called it a case o brain haemorrhage and tried...