21 Jan 2012 - 5:04am | Nava Thakuria
Assam State Aids Control Society in association with Guwahati Press Club has organized a media workshop on HIV/AIDS issue on Saturday (Jan 21) at press club premises. The workshop will start at 11 am... 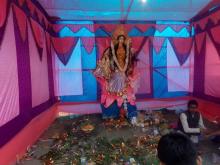 22 Jan 2018 - 9:02am | AT News
GUWAHATI: Academic fraternity across the state is soaked in the pomp and gaiety of Saraswati puja on Monday. Schools and colleges, clubs and institution have dressed afresh as the students...