3 Nov 2014 - 12:02pm | AT News
A massive protest awaits BTAD areas again if the two NGO workers are not free at an earlier date. Various political parties, organizations and individuals have urged the kidnappers to release the... 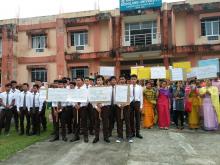 12 Nov 2019 - 1:26pm | Dr Aniruddha Babar
An article published on 6th April 2018 in Northeast Today Magazine, which flashed a determination of 73 year old man from Mizoram to complete his school education made me happy as well as thoughtful...