24th October--Around the world today—from capitol cities to the melting slopes of Mount Everest, even underwater on dying coral reefs—people held rallies aimed at focusing attention on the number 350 because scientists have insisted in recent years that 350 parts per million is the most carbon dioxide we can safely have in the atmosphere. The current CO2 concentration is 390 parts per million.

These global actions come six weeks before the world’s nations convene in Copenhagen for the United Nations Climate Change Conference to draw up a new climate treaty. 89 countries have already endorsed the 350 target, as well as the chairman of the Intergovernmental Panel on Climate Change, Rajendra Pachauri, the world’s foremost climate economist, Sir Nicholas Stern, and Nobel prize-winner Al Gore.

Youth Alliance for Climate (YAC) and Youth Spirit has organised the 350 day of action at the Darwin School of Business (DSB) in Guwahati. The programmes included awareness programme and signature campaign on 24th October. The students of DSB have appealed the concerned global leaders to take up action and combat climate change for the interest of the future generation. There was discussion on the forthcoming COP 15 during the event which is going to be held at Copenhagen later this year. YAC and Youth Spirit have appealed the young people to stand united to combat climate change and to make the campuses climate friendly.

17 Jul 2017 - 1:01pm | AT News
Assam also joins the nationwide presidential polls on Monday in search of a successor of Pranab Mukherjee who demits very soon.  The legislators have started coming one after another...

25 Apr 2013 - 9:32am | AT News
Health and education minister Himanta Biswa Sarma buys band name again after Saradha Chief claimed to have paid him Rs 3 crore.In a letter to CBI on April 6, Sen said, “another high level person who... 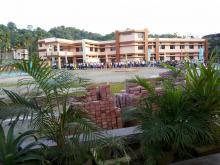 1 Jun 2016 - 9:30am | CM Paul
A 48 year old vocational / skill training school in northeast India’s gateway city has geared up to be an electronic manufacturing hub in Guwahati. Besides setting up manufacturing units and...