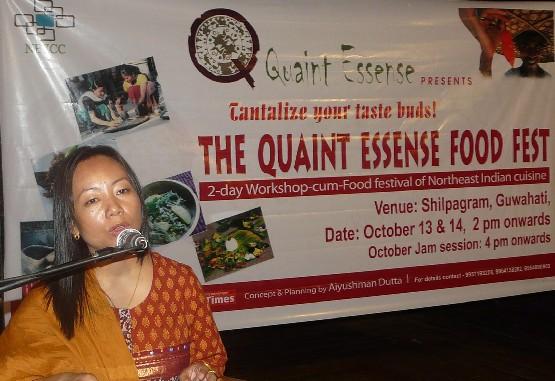 ‘The Quaint Essence Foot Fest’ a two day workshop cum Food festival of ethnic North East Indian cuisine got underway today. V Hekali Zhimomi Director; NEZCC an ardent food lover inaugurated the event followed by Dr. A C Bhagawati former vice chancellor of Arunachal Pradesh. Speaking as Chief Guest Zhimomi outlined on the importance of preserving and marketing the kitchen of population of North East India. “The populations of North East are very intelligent cook and consumers as their food ingredients are based on need of time” said the ardent Naga food lover. In her message to participants she said that it was the high time to explore the kitchen of North East and market them in a commercial way.

Dr. A C Bhagawati former vice chancellor of Arunachal Pradesh an ardent food lover of the region while delivering his speech as Guest of Honour spoke in length and breadth of foods of north east and its valueless cheap marketing in Guwahati and other parts in the of ethnic foods and other brand name. He also lambasted the cook playing with the ethnic flavour and name of food. He hailed the efforts of the organizer to create mass awareness on ethnic North East Indian cuisine. ‘The Quaint Essence Foot Fest’ has been conceptualized and planned by Aiyushmaan Dutta young journalist and music critic based in Guwahati. Mr. Dutta is also a voluntary contributor to Assam Times who is the President of Quaint Essence – the organizers. The workshop is to be followed by food festival at 2pm and October Jam-musical rock show event from 4pm onwards. The fusion of food and music will be attended by Guwahatian food and music lovers and also from other North Eastern states. The event is supported by NEZCC Dimapur and Assam Times is its online media partner. Assam Times invites all its readers and surfers to the event that ends on October 14.

1 Feb 2012 - 1:29pm | editor
The Assam Public Service Commission on Tuesday has shortlisted 3220 candidates for civil service mains examinations to be held during the next few months. According to information, out of...