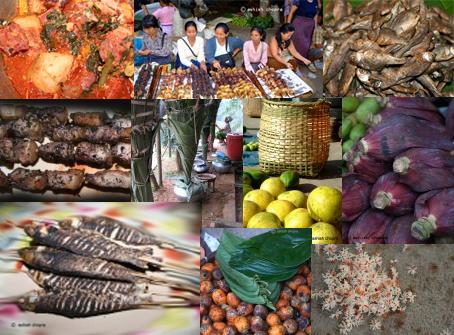 India’s Northeast can rightfully be considered an uncrowned jewel, what with its remarkable beauty and splendour. The topographical, geographical, cultural and other factors which distinguish the region from other parts of the country may indeed be attributed to the diverse group of people inhabiting the region and their rich and varied customs, which influence the lifestyle and way of life of the people. Indeed, the Northeast is literally an unexplored paradise; a region bestowed with such pristine beauty and splendour that is bound to drive a visitor in a state of perpetual amazement.

Speaking of the Northeast and its distinctive features, one facet of life of the people here, which is particularly responsible for lending that aura of mystery and wonder, would undoubtedly be the varied forms of ethnic cuisine of the people residing here. For the people residing in this distant corner of the country, isolated from the hinterland, cuisine is more than just a source of sustenance and nourishment; it defines life as a whole. As food connoisseur Jyoti Das, who has authored a number of books on north-eastern cuisine, says, “Here, the ethnic cuisine of a community or State is intrinsically related to the ethos and lifestyle of the people, chronicling the essence of their traditions, values and belief systems. For instance, the Assamese believe that food is a gift from god and its preparation a form of prayer. An elaborate ritual marks the preparation of feasts for different occasions like weddings, shradhs (ceremony following the demise of a person), and the like, though the basic purpose is ritualistic cleanliness and customary hygiene.

The north-eastern region boasts of a huge array of ethnic cuisine and such is the variety and diversity of the gastronomical concoctions here that an outsider is often left astounded at first impact. The unique aspect of north-eastern food is its simplicity and delectable aromas. The riot of flavours that pervade the kitchen when one cooks any ethnic cuisine of the north-eastern States have a traditional charm that is typical and distinctively exclusive to the region and its people. From the banana to the bamboo, from pickled pork to smoked fish and rice cooked in bamboo hollows, the Northeast has it all. Indeed, the imaginative versatility within the confines and limitations of tribal, rural, and riverine culture do not fail to astound at first sight.

And not only is Northeastern cuisine appealing for the senses, it is also highly lucrative healthwise. As Aiyushman Dutta, a journalist who has been working on the cultural aspects of the Northeast, says, “In today’s contemporary age when people are getting increasingly conscious about the dietary content of the food they eat, north-eastern food, with its high nutritional value and simple methods of preparation, can easily be promoted as one of the healthiest, tastiest and most wholesome cuisine in the world.”

Given the richness of our ethnic cuisine, it is indeed a matter of concern that no study or research of any kind has ever been carried out to document the manner in which the ethnic cuisine of each of the north-eastern States influences the lifestyle and culture of the people. It is beyond doubt that proper study or research on these lines would help bring our many more hidden facets and similarities between our culture and those of our neighbouring countries. Though documentation work has indeed been attempted, it has simply been limited to documenting the method of preparation of each food item, totally bypassing the cultural significance intrinsically attached to the food habits of the people.

An interesting initiative towards this end is the Quaintessence Food Fest, a two-day Workshop-cum-food festival of ethnic Northeastern cuisine, which will be held in Shilpgram on October 13 and 14. Organised by Quaint Essence with the support of the North East Zone Cultural Centre, Ministry of Culture, the fest promises to showcase the exclusive ethnic cuisine of the region and the manner in which it defines the culture and lives of its people here. Besides paper presentations by experts in the field of ethnic cuisine, the fest will also see screenings of films and documentaries based on our regional cuisine. And for those who don’t want to waste their time on deliberations, the food stalls to be set up are sure to stop them from complaining!

Photos are taken from http://ashthefoodie.wordpress.com/ with permission of the owner - Ashih Chopra.

9 Mar 2010 - 12:42pm | editor
For the first time on Monday the Assam government admitted that dreaded terrorist and DHD-J chief Niranjan Hojai is absconding. This was confirmed by Assam forest minister Rockybul Hussain as he was...

Is art a smart investment?
An evening of classical music
A tale of a village along a river
Minoti Borthakur - Courage to fight the odds!
Where is the human touch?
Tribute or Obituary?