In a gory incident of ragging, a TDC first year first year student was burnt alive at a college in the outskirt of the city of Guwahati on Monday. According to information, the incident took place at Dimoria College in kamrup district where a TDC first year student Nitumoni Das who hails from Morigaon was burnt alive by his senior collegaue Prafulla Das who is absconding. The entire incident took place following an altercation about a T-shirt. It is alleged that police and the college authority are trying to cover up the entire incident. Investigation is on.

Permalink Submitted by Pallavi Barua on Tue, 08/09/2009 - 16:53
This is gruesome. Is this the result of 'education'? Time for college authorities to arrange seperate hostels for students of different batches. Different batches, especially the first and the second year students should be allotted different buildings or Assam-type quarters with armed security guards.

11 Apr 2014 - 8:05pm | AT News
The Assam Public Service Commission has announced the schedule for the Assam Civil Service Combined competition   examination.In a press release, the panel informed that altogether 2,900... 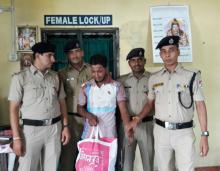