Birth of an elephant celebrated in Udalguri

People of Nonaipara near Indo-Bhutan international border in Udalguri district have been passing sleepless nights since a couple of months, as herds of wild elephants had started roaming in the villages near the tea gardens causing deaths to both man and elephants.But thanks to people of Nonaipara for celebrating the birth of a new born elephant recently. According to information received, a herd of wild elephants numbering 50 to 60 had been roaming in Orangajuli, Nonaipara and Bamunjuli areas since last month.On July 20 a mother elephant suddenly gave birth to a healthy calf at section 28 of Nonaipara TE at 8 am, just one km away from the human habitation. All the villagers (mostly belonged to tea garden community) including Ananta Bagh,CEO and Golap Bohra, secretary of Green Valley Forest & Wildlife Protection Society (an NGO formed by the locals for the protection of wild animals, particularly elephants) celebrated the birth of the new elephant calf distributing sweets etc.They also decided to name the baby elephant “Nandini” The herd moved to section No.4 the next day (locally known as Guatemala). Ananta Bagh, CEO of the NGO told The Assam Tribune over telephone that they would keep watch on the baby and mother for safety.

In another incident, one Arjun Tanti (30) inhabitant of section 17 of Nonaipara TE was seriously injured by a wild elephant while he was taking bath in a stream on July 21 at 6 pm. The people of the locality have reacted sharply at the incident, saying that state government had totally failed to end man elephant conflict in the northern areas of Udalguri district even after the deaths of several man and elephants. They urged the chief minister and forest minister of Assam immediately to intervene in the matter ,otherwise of which the situation could well go beyond control.In the meantime WWF officials have visited Tangla to meet representatives of Green Valley Forest & Wildlife Protection Society and other organizations on July 22 and decided to arrange an awareness camp at Bamunjuli on August 5. 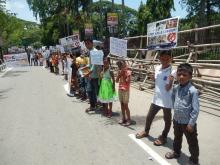 13 Jun 2016 - 11:27am | AT News
A human chain comprising of around a 100 children raising slogans against child labour was today organized on the occasion of Anti Child Labour Day, by the Centre of Development Initiative (CDI)...