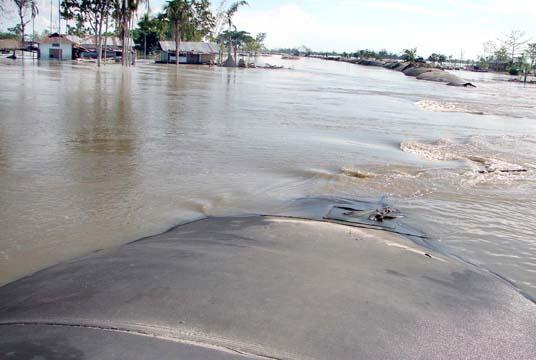 The overall flood situation remains unchanged in Assam where one person was swept away in Majuli. The Brahmputra and its tributaries are flowing above the danger mark, affecting over five lakh people in ten districts. Flood waters arer wreacking havoc Lakhimpur, Dhemaji, Dibrugarh districts, Jorhat in upper Assam, Morigaon in central Assam and Barpeta, Kamrup, Bongaigaon, Dhubri and Baksa in lower Assam were submerged by the swollen rivers due to incessant rains in catchment areas. Almost the entire majuli island got flooded and a villager was swept away on Sunday. The situation in the districts of Barpeta, Bongaigaon, Dhubri and Baksa was grim with flood waters submerging nearly 50 villages and affecting more than one-lakh people. In the worst-hit districts of Lakhimpur, Dhemaji and Jorhat, vast tracts of land remained under water following embankment breaches caused by heavy rainfall in the foothills of Himalayas in Arunachal Pradesh. In Dhemaji district, water of the river Semen has inundated vast tracts of land in Jonai sub-division while water of rivers Gai and Jiadhol was also in spate.

Take up Brahmaputra issue with Beijing

13 Dec 2017 - 7:14am | AT News
NEW DELHI: Chief minister Sarbanabda Sonowal had urged prime minister Narendra Modi to take up the Brahmaputra issue with Beijing where the mighty river that originates in Tibet now keeps flowing...

20 Jan 2016 - 4:32pm | AT News
Chief Minister Tarun Gogoi is meeting Rahul Gandhi in New Delhi on Thursday to finetune a fresh set of strategies to remain in power for the fourth consecutive terms. The Chief Minister who arrived...