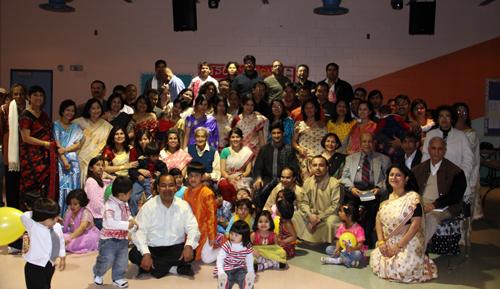 Asom Sangha Canada celebrated the onset of the Assamese New Year and Rongali Bihu on April 11 at the River Grove Community Centre in Mississauga, Ontario. The event witnessed a large gathering and enthusiastic participation of the Assamese families and individuals based here in the greater Toronto Area and also guests from USA and Assam.

Established in 1971, Asom Sangha is the oldest Assamese organization in North America. This year marked the 39th edition of the Rongali Bihu celebration by the Sangha. The evening was made special and a memorable one by the presence of guest artist Rabin Goswami and his wife Arundhoti Goswami.
The children’s cultural event started with a chorus participated by Ruchi, Rubin, Jishnu, Garggie, Shreya, Paul and Riana which was followed by a Bihu dance by Garggie. Shreya and Anwesha’s melodious songs and Jishnu’s recital of a poem by Rupkonwar Jyoti Prasad Agarwala set the tone for a wonderful evening. Garggie, Innika, Sneh and Priya did a wonderful dance choreographed to the song "Bonoriya ami bonor sorai."

The cultural program started with the chorus “Sreemoyi Asomi” which was followed by Rita Barua welcoming the New Year with her composition “Bohagi Adoroni". A graceful Bihu dance by Gitimoni Barua brought the audience to its feet. Iswar Chakravartty recited a self composed poem while Bikul Das played the khol. Mitali Sarma Barua’s songs were mesmerizing; she was accompanied by Nabya Ranjan Baruah, Kaushik Bhattacharjee and Jeet Das on the instruments.

Guest artist Rabin Goswami enthralled the audience with his melodious voice – a voice that reminded us of the legendary Dr Bhupen Hazarika and took the audience down the memory lane. His wife Arundhoti Goswami joined him for a duet and also sang a solo song.

Urvashi Sharma and Rabin Goswami were adjudged winners of the best traditional wear awards. Earlier in the evening, Palash Thakur, President of Asom Sangha welcomed the gathering, the new families, individuals and new-borns to the community fold: Arnab Hazarika, Rimli and Sanjeev Dutta, Dr Manash Sharma and Nayana Sharma, Roma and Avinash Dabrai; babies Abir (son of Suranjita and Mousam Hazarika), Nish (son of Jayashree and Subrata Chakravarty), Rivan and Shivan (sons of Rimli and Sanjeev Dutta), Tvisha (daughter of Urvashi and Palash Thakur) and Ashaz (son of Shahana and Parvez Rahman). The Assamese community also bid farewell to Bikul Das and family who are moving to California. A minute’s silence was observed for the departed souls of victims of violence in Assam and relatives of the Assamese community in Canada.

The Cultural program came to an end with “O Mor Aponar Desh” followed by Husori and Mukoli Bihu led by Nabya Ranjan Baruah, Jibeswar Talukdar and Rita Barua with active participation from one and all. At the end, Dibyajyoti Gohain Barua, Secretary of Asom Sangha, delivered the vote of thanks to all the participants, sponsors and the anchors for the evening - Debi Sarma, Ruchi Barua and Uma Talukdar.

14 Nov 2014 - 11:15am | AT News
Assam joins Children’s Day to mark Nehru’s 125-th birth anniversary on Friday along with other parts of the country. Chief minister Tarun Gogoi interacted with over 200 selected children in Guwahati...

26 Aug 2012 - 1:46pm | editor
Suggesting a rerun of violence in BTAD areas, six people were stabbed to death in Chirang district on Saturday.The incident took place at around 5-30 in the evening at Chaoudharipara at Bijni in the...

2 killed in clash over land dispute

14 Apr 2014 - 7:25pm | AT News
Two persons were killed and five others have been critically injured when two groups of people clashed with each other in Nagaon district on Monday.The incident took place in Bokulguri area where...