Assam is all set for the second and final phase of Lok Sabha voting on Thursday in 11 of the 14 Parliamentary constituencies. According to information, polling officials along with materials have already reached their respective polling centres. Elections are set to be held in Dibrugarh, Jorhat, Kaliabor, Nagaon, Tezpur, Lakhimpur, Guwahati, Mangaldoi, Barpeta, Dhubri and Kokrajhar.

The state went to the first phase of polling in three seats...Silchar, Karimganj and Autonomous District in Assam April 16 with heavy polling recorded. An estimated 14.73 million voters are eligible to exercise their franchise in the second phase in which 121 candidates are in the fray.
The ruling Congress party is locked in a direct fight with the opposition combine of the Asom Gana Parishad (AGP) and the Bharatiya Janata Party (BJP), while for at least two seats it would be a triangular contest with the Asom United Democratic Front (AUDF) also emerging as a political force to be reckoned with.

The BJP has renominated one out of its two sitting MPs with Rajen Gohain contesting from Nagaon while its other MP Narayan Borkotoky from Mangaldoi is not contesting but its state unit president Ramen Deka is making a bid to retain the seat for the party.
The AGP, on the other hand, has renominated both its sitting mps--Sarbananda Sonowal from Dibrugarh and Dr Arun Sarmah from Lakhimpur.
BJP's Kokrajhar candidate S K Swismuthiary is seeking a fourth term in Parliament and had contested the 2004 polls as an Independent.

The Congress has also given tickets to three former MPs who contested the last polls but lost--Paban Singh Ghatowar from Dibrugarh, Ranee Narah from Lakhimpur and Madhab Rajbongshi from Mangaldoi. BJP's Bijoya Chakravorty, who had won the 1999 polls and went on to become a union minister but was denied a ticket in 2004 in favour of Assam's cultural icon Dr Bhupen Hazarika, has been given the ticket for the prestigious Gauhati seat.

26 Jan 2014 - 5:52pm | AT News
BPF is likely to re-nominate Biswajeet Daimary to the Rajya Sabha with the help of its alliance Congress.BPF sources told Assam Times that Daimay would be the second choice candidate in the Rajya...

19 Nov 2017 - 8:30am | AT News
GUWAHATI:Two more wild elephants were crushed to death by a train in thr outskirt of Guwahati city sending huge shockwaves among the animal lovers on Sunday. The incident took place at Thakurkuchi... 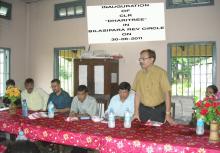