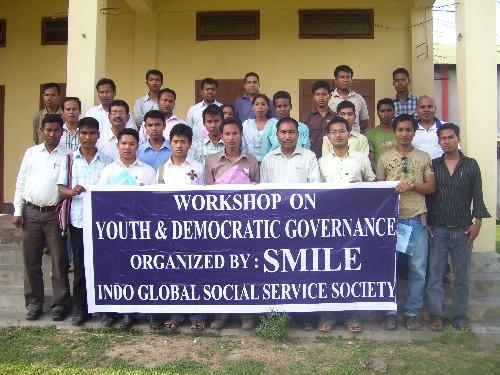 Students Mobilization Initiative for Learning through Exposure (SMILE), a youth programme under Indo Global Social Service Society had organized a one days youth workshop on Youth and Democratic Governance at Bihuram Boro Memorial Junior College at Udalguri on 12th April. The programme was specially designed to get more participation from the youths of Bodoland Territorial Council Area and some other districts of the state. Dipen Boro, President of Udalguri District All Bodo Students Union (ABSU) said that Good Governance is an integral part of our democracy but due to corruption and lack of vision with the political leaders the country has not progressed in spite of so many people in the country. He also mentioned that youths of the country must take initiatives for bringing good governance in the country. He was mentioning the deteriorating law and order situation in the BTC area and appealed the youths to take active part in the development of the society. Speaking on the main theme of the workshop, Ranjan K Baruah a youth activist and Ex-SMILER said that democratic governance is important in the largest democracy of the world. Speaking on the some of the element s of the democratic governance he stressed on the importance of human rights, active media, accountable public institutions, rule of law, etc.

Ritupon Gogoi, State Coordinator of IGSSS spoke about the organization and how youths can take part in the activities of IGSSS. He appealed the youth to exercise their votes for good governance. ‘These kinds of programme is very important in BTC area as I have learned new things and I would like to exercise the same in my areas’ said Somal Daimary a former General Secretary of Tangla College.

Permalink Submitted by ranjan daimari on Mon, 31/05/2010 - 20:33
It was great.carry on so that you can make youths to participat for the development of society.....from mangalore university.

14 Aug 2019 - 9:35am | AT News
Kohima: A few rebels are believed to have been hurt as they were locked in a heavy exchange of firing in Nagaland on Wednesday. The incident took place in Tobu area in Mon district where both side...

18 Jul 2020 - 11:30pm | AT News
Tinsukia: A relief camp inmate in Baghjan area allegedly committed suicide by consuming poison on Saturday sending shock and anger across the state. The incident took place after the inmate has...