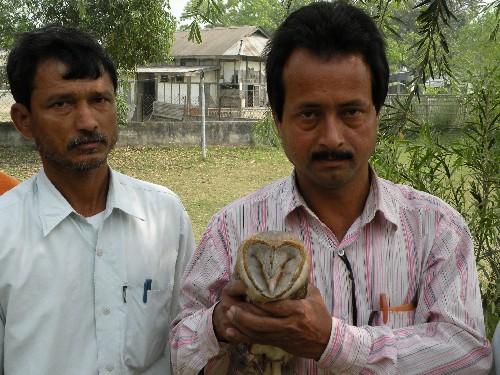 Animal lovers thanked artist cum popular singer Puspa Hazarika of the village Bananguri Jakuachuba,near Kalaigaon for rescuing a Barn owl (bubo nepalensis) in his village on March 9.It has been learned from Puspa Hazarika that a village lady had seen it lying on the waterÃ‚Â  deep in a village well.Thinking it to be dead ,the woman had thrown the bird away.The owl would have been dead if not Puspa Hazarika arrived there in time.He saw that the owl was not dead and so he carried the bird to his home for nursing.All the members of his family took their turn to nurse the dying bird to regain its strength in three days and finally he handed over the 10 months old owl to D.N.Hazarika,Circle Officer,Harisinga Revenue Circle in presence of forest officer Bharat Deka.to be released in the Khalingduar Reserve Forest.On the other hand wildlife lovers have condemned the killing of a python at Kawadanga Outala village in the first week of March by some miscreants.According to Puspa Hazarika,the python which was 8 feet long had been roaming through village forest on the bank of river Chandana in search of food.

31 Oct 2009 - 8:21am | editor
Security forces are fanning the areas across Assam-Arunachal pradesh border in Dhemaji district a few hours after NDFB kidnapped a top ranked railway officer on Saturday. According to information,...

23 May 2013 - 8:00pm | Abdul Gani
The notable increase in the literacy rate by 8.9 per cent than last decade and growth of sex ratio within age group of 0-6 are among the positive trends in the state as the final Primary Census...