Caught in a barrage of controversy Assam state Chief election officer has put in his papers and joined the Congress on Sunday.

According to information, C K Sarma who has been working as the state's chief election officer is seeking Congress ticket for the upcoming Lok Sabha polls. He already talked to a few party leaders of the APCC. As the news was spreading like wild fire, Opposition AGP and BJP unitedly upped ante on him and asked him to step down to retain the sanctity of the Election Commission.

Sarma put in his papers on Sunday but he is not sure of party ticket for the upcoming Lok sabha polls. 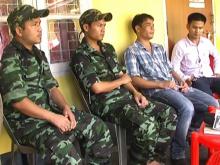 21 May 2019 - 4:28pm | CM Paul
Darjeeling — The first college in the Darjeeling hills to under take National Assessment and Accreditation Council (NAAC) has retained its ‘A’ Grade in the 3rd Cycle concluded on 3rd and 4th May 2019...

15 Jul 2017 - 10:26am | Shajid Khan
A youth was arrested by police for allegedly manipulating and issuing fake Voter ID. Police picked the youth identified as Ranjan Pathak (28)  from a cyber cafe at Bazar khola, Tangla from where...