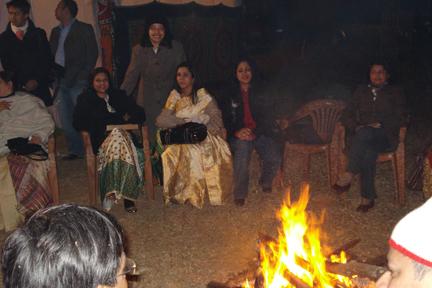 Uruka, on the occasion of Magh Bihu was celebrated by the People of Assam as well as Well-wishers of Assam, currently residing in the millenium city of Gurgaon & Delhi on 10th January, 2009. The event took place in an open space, near HUDA Community Hall in Sector-46, Gurgaon. A tent was erected and a huge bonfire added to the spirits of the people, gathered.

The bonfire was lit-up at around 8-30PM and 'Tambola' started following a hot cup of tea. As earlier, the noted personalities including Renowned Danseur Padmashree Pushpa Bhuyan, accompanied by her husband Mr. Nabakamal Bhuyan, Consultant to World Bank, Mr. Jiten Gopal Borpujari, Dr. Apurba Baruah from London, Times of India Correspondent, Mr. Pranab Saikia etc. added fervor to the event. Dinner, consisting of Rice, 'Chana dal', 'mutton', 'fish-kalia', 'Bilahir tok', 'Gulab Jamun' etc., was served at about 11PM. The dinner was succeeded by spontaneous Bihu songs & Bihu dances. The young as well as the old danced with abundant glee to the tunes of 'Dhol' & 'Tal', as if in Assam. Even the kids had a blast."

18 Jul 2007 - 3:55pm | luitneildon
GUWAHATI, July 18: Hordes of suspected Bangladeshis are being pushed into Asom from Nagaland near the New Sonowal area along the Mariani-Mokokchung Road in Jorhat district. Nagaland’s Ao...