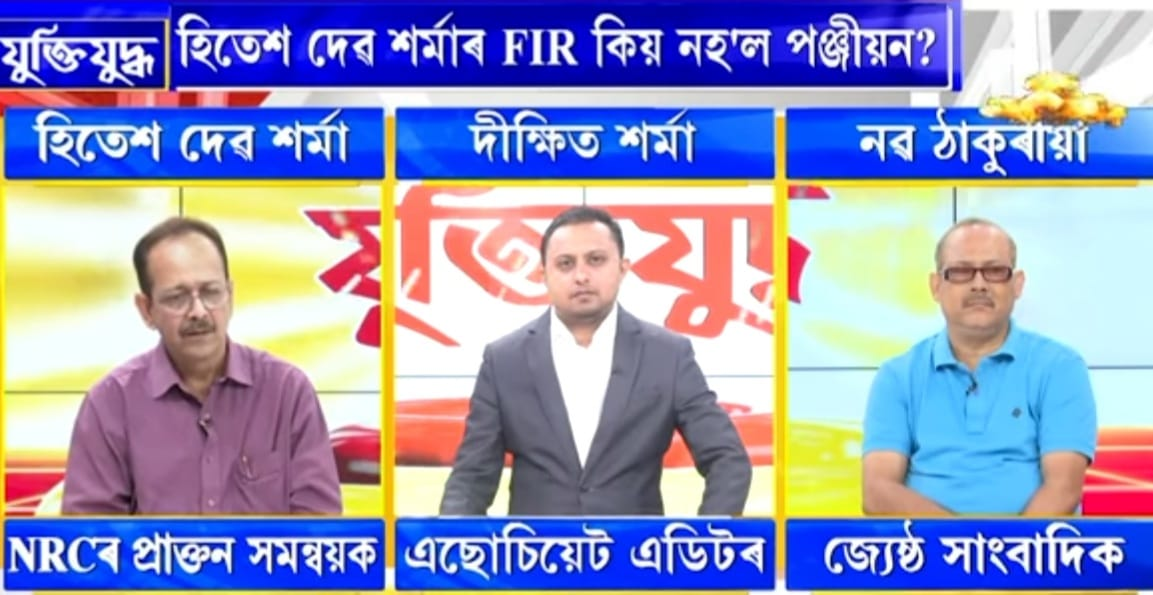 Participating in a debate on satellite television or digital channels needs some homeworks to make the deliberations short and clear. Unless you face an arrogant anchor and unruly participants, the experience in talk shows normally emerges as an intriguing one. It happened to me, as I had recently participated in a digital media discussion on the pertinent issue of National Register of Citizens  (NRC) in Assam, where the prime guest was none other than the immediate past State NRC coordinator Hitesh Dev Sarma. The talk show host Dikshit Sharma put the questions in a clever way so that the issue comes alive and my part was just to interpret Dev Sarma’s version for clarity to the valued audience of Time8.

Dev Sarma, recently retired as an Indian Administrative Services officer, lodged complaint against his predecessor Prateek Hajela, another IAS officer- presently in deputation to Madhya Pradesh, accusing him and the system integrator (Wipro Limited) of engaging in corruption and money laundering while updating the 1951 NRC in Assam. He clarified that the supplementary NRC list, which was released on 31 August 2019 excluding 19,06,657 applicants due to lack of papers, was asserted by Hajela as the final one (but the same is yet to be notified by Registrar General of India). As Hajela’s three-year deputation term is almost completed, he is scheduled to return back to Assam by this year.

The issue of base year for NRC updation in Assam also came to the discussion as the State had to obey 1971 as prescribed in the Assam Accord (unlike the national cut-off year of 1951). The people of Assam are expecting a final verdict on the cut-off year (to identify foreigners in the State) from the Supreme Court of India. Dev Sarma was asked about the implications of a verdict favouring 1951 as the base year for Assam too, where he stated that it would increase more work to the responsible officers and employees, but the common people (except a few) would face no troubles. With stored documents in the NRC directorate, the issue would be resolved amicably, added Dev Sarma.

Speaking about the inclusion of thousands of suspected families in the NRC draft, Dev Sarma claimed that Hajela used a faulty software technology in the process with no cross-checking facility. The provision  for checking family legacy datas (through family tree matching) was deliberately designed in such a way that no superior officers (except Hajela) could go for reverification. So it’s a criminal and anti-national activity, asserted Dev Sarma. On another occasion, Hajela adopted the policy of DMIT (district magistrate investigation team) verification, which was not recommended by the apex court, but surprisingly he did not face any brickbate from the then SC chief justice, reasons best known to Ranjan Gogoi only.

Assam Public Works (original petitioner in the apex court with the demand to update the NRC in Assam) filed a number of police complaints against Hajela and his close aides alleging gross misappropriation of government funds in the process. Lately, APW chief Aabhijeet Sharma lodged another complaint against information technology firm Wipro alleging the misappropriation of public money, where the influential civil rights group made the NRC directorate also a party. Quoting the Comptroller and Auditor General of India’s interim report, it narrated in the FIR that a massive corruption had taken place in the Rs 1,600 crore exercise with the active role of the concerned top officials.

Dev Sarma, who also submitted an affidavit in the apex court, said that the accountant general observed that undue benefit of Rs 155.83 crore was allowed to SI/labour contractor. It also identified an avoidable expenditure to the tune of Rs 10.73 crore in connection with the engagement of third-party monitoring consultants. As per the rules, for expenditure of above Rs five crore, Hajela had to obtain an approval from the empowered committee, headed by the State chief secretary or from the RGI, but he did not do so.

In his formal complaint, Dev Sarma described the anomalies where the Wipro engaged one sub-contractor for providing data entry operators (DEOs) without any prior approval from the authority. It was found that the then State coordinator was aware of the sub-contractor, but did not intervene. Wipro was paid Rupees 14,500 to 17,500 per month per DEO (by the NRC authority), but the DEOs got only Rs 5,500  to  9,100  per month during the years (2015 to 2019). Shockingly, more than 6000 DEOs were denied even the least amount as per the country’s  minimum wages act. Some DEOs even came to the streets demanding their due amounts. They also approached the State labour commissioner for their dues.

My final assertion was that the DEOs must get their legal dues irrespective of the fate of NRC, as they have nothing to do with it. A huge amount of money, meant for them, was grabbed by some individuals with corrupt practices. Unfortunately three Guwahati-based senior television journalists have also been named and shamed on social media as the beneficiaries of NRC scam. Thousands of social media users participated in the discourse and many urged those  media persons to clarify their stand, but they have not made any public statement about the allegation, which is surprising and unusual compared to their smart & energetic personalities reflected in the television screen.

21 Jan 2014 - 9:42am | AT News
Dispur police have arrested a dreaded ULFA militant who was camping in the city to strike in the run up to the Republic Day celebrations. A detonator was also found from his possession. Identified as...

5 Jul 2016 - 5:18pm | Parshwa Patgiri
Hundreds of AJYCP leaders and activists on Tuesday blocked the National Highway in Bajali area in Barpeta district opposing the Centre’s move to auction 12 oilfields to the foreign companies. Led by...