All for justice to Renuka

11 Oct 2014 - 6:17am | AT News
HANTIGIRI NARZARY, KOKRAJHAR: Hundreds of women activists under the banner of the All Bodo Women’s Welfare Federation staged protest in Kokrajhar on Friday demanding high level inquiry into...

26 Apr 2018 - 8:36am | AT News
GUWAHATI: The probe into the APSC scam is set to take a new twist after the Dibrugarh police investigating it seized around 300 answer scripts of civil service answersctipts from Guwahati on... 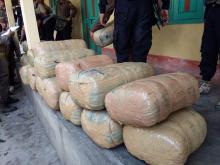 28 Feb 2017 - 6:24pm | AT Kokrajhar Bureau
Kokrajhar police seized huge quantity of smuggling ganja at a truck at Karigaon along 31 C National Highway today in Kokrajhar which was supposed to bound for Delhi from Shillong of Meghalaya state...