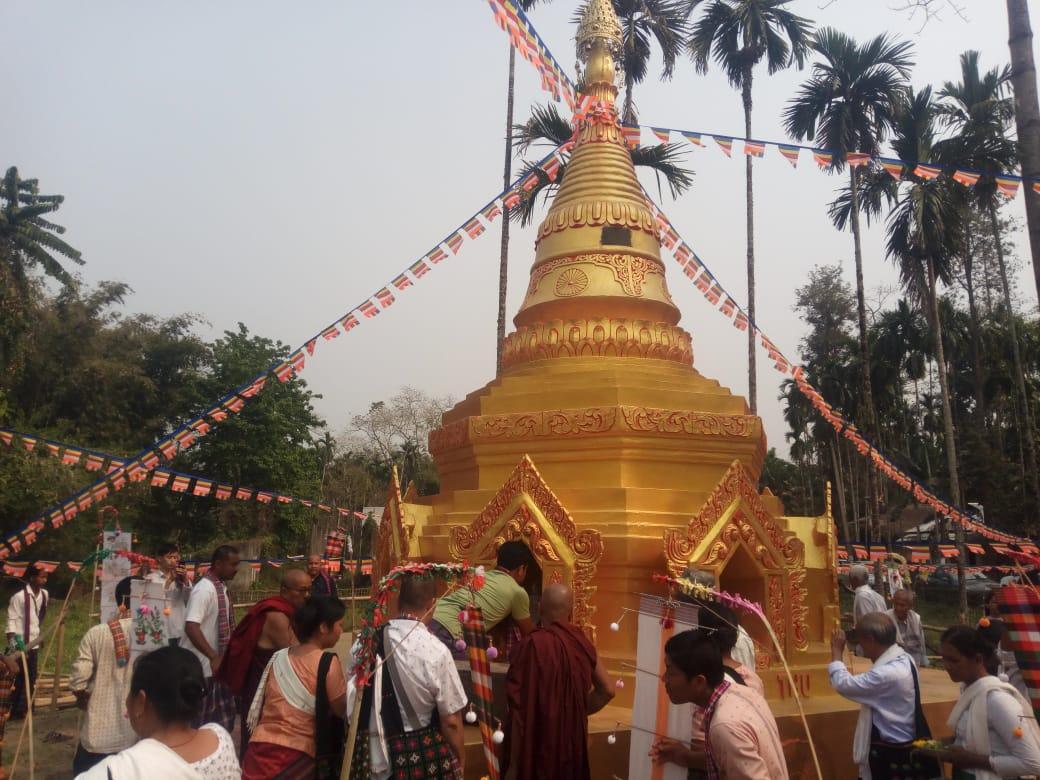 The two-day inauguration of the "Golden Pagoda" or "Stupa" in Buddhism, which is a holy place for Buddhist Community people all over the world, was completed on Sunday at Phaneng Buddha Vihar, Jagun Gaon Panchayat, Margherita.

Kungmu Kham (Golden Pagoda) was inaugurated in memory of the Late Aai Kham Mown Chakhap, son of Chow Ngi Chaikyo Chakhap and Nang E Than Pomung Chakhap, a distinguished Tai Phakey family from the Margherita region. On the first day, the programme begins with the hoisting of the Buddhist flag by Gyanopal Mahathera, president of Assam Bouddha Mahasabha and head monk at Buddha Vihar, Naharkatiya. This was followed by Hap Poi Khamsum Thomtra, Tangthi on Kongmukham (Temple), Procession of Idols and Kalpatru. After Kongmu Kham was inaugurated in presence of Buddhist monks and large number of Buddhist devotees who came from Assam, Arunachal Pradesh, Namsai and Karbi Anglong.

Gyanopal Mahathera said that Phaneng Buddha Vihar is located in Assam Arunachal Pradesh, which is a center of pilgrimage attraction. This place is inhabited with the Tai Phakey Community, which is unique all over Assam and North Eastern States. I appeal to Assam Chief Minister Dr Himanta Biswa Sarma to develop Phaneng Buddha Vihar so that tourism can be boosted up.

Chow Ngi Chaikyo Chakhap and E Than Pomung Chakhap said our son Aai Kham Mown Chakhap built a Kongmu Kham (Golden Pagoda) at Phaneng Buddha Vihar in 2018. He built it in memory of our son.

On the second day the programme concluded with Tang Anekeja (Consecration Ceremony) and Homage to the Triple gems, Taking precepts and Dana Talk Khamsun Thomtra. The illumination of candles at Phaneng Buddha Vihar made the sanctity more attractive.

23 Mar 2015 - 12:55pm | Dibya J Borthakur
Pallavi Kachari, ACS on Saturday took charge as the Circle Officer of Raha Revenue Circle. She has replaced Monuj Kumar Sikaria , who has been transferred as Circle officer to Barpeta district....

28 Aug 2015 - 11:02pm | AT News
The mystery over the Guwahati model murder is nearing an end when police arrested two persons on Friday.Police have extracted startling revelations from the main Neel Nibaron Lahkar who confessed to...

8 Feb 2018 - 1:07pm | AT News
Kokrajhar: Security forces are fanning in the nook and corner of BTAD areas in search of the rebels who keep mongering trouble at regular interval in some pockets. The stepped up counter operation...