A major tragic incident was averted in Rangiya on Saturday noon when a powerful plastic bomb was recovered near wholesale market. According to information, an anonymous caller rang up the Army's 107 engineering regiment around 6.30 am saying that a bomb was planted in the market.

An operation was launched by the Army with the help of police and the improvised explosive devise was recovered from inside a water pipe near the storeroom of the water resource department, Borolia division adjacent to the market.

The bomb is believed to have targeted for Sunday market where thousands of buyers and sellers converge from the district and neighbouring Baksa district, besides bordering areas of Bhutan, they said, adding the bomb was later defused. Later the bomb was defused. 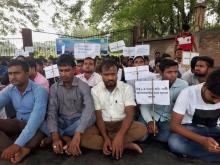 10 Apr 2014 - 7:20am | AT News
Amid tight security repolling is going on in five booths in Jorhat Lok Sabha constituency on Thursday.The repolling began at 7 in the morning where the voters are waiting to exercise their franchise...