BJP MLA with rifle on shoulders! 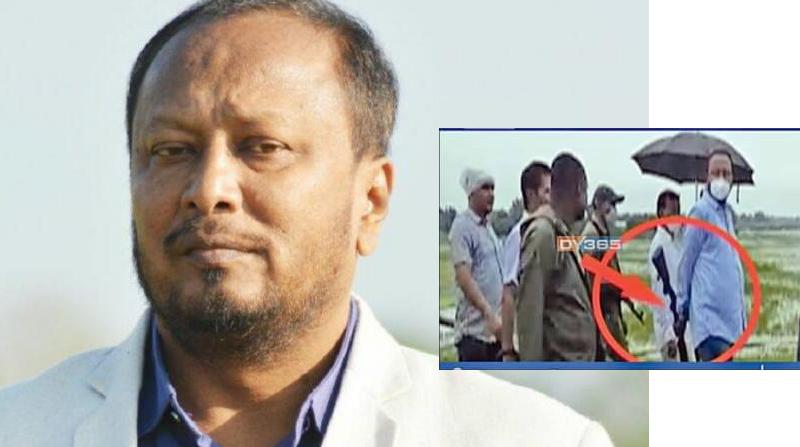 Tezpur: A BJP legislator with a rifle on his shoulders on Thursday during a stock-taking visit to a tense site evoked no less reaction in many quarters. The legislator in question is none other than Sootea MLA Padma Hazarika who reached Chakigarh area after a group of illegal settlers attacked a joint team of police and civil officials on eviction duty.

As many as 12 people including police officers sustained injury as they tried to evict the illegal settlers before handing over the plot to a group of local entrepreneurs.

But the visit of the legislator with a rifle on his shoulders raised the eyebrows of many parties and organizations.

State Congress president  Ripun Bora said that the way Hazarika was on his stock-taking visit suggested the failure of his own party government.

Bora further urged the police department to look into the issue with due seriousness since Assam is not UP or Bihar.

State CPI also slammed Hazarika for trying to take law in his own hands even after he was surrounded by his security guards which suggested the failure of the home department.

24 Oct 2014 - 8:30am | Hantigiri Narzary
Properties worth lakhs of rupees have been reduced to ashes when a tent house caught fire in Kokrajhar on Thursday.The incident took place at the Subashpally-based Subdev Tent House area at night....

29 Aug 2010 - 11:08pm | editor
Two ULFA linkmen were nabbed by Army with arms and explosives in Goalpara district on Saturday. Identified as Ambas Ali and Dabanam Changma alias Ali Garo they were involved in the July 30 bomb...