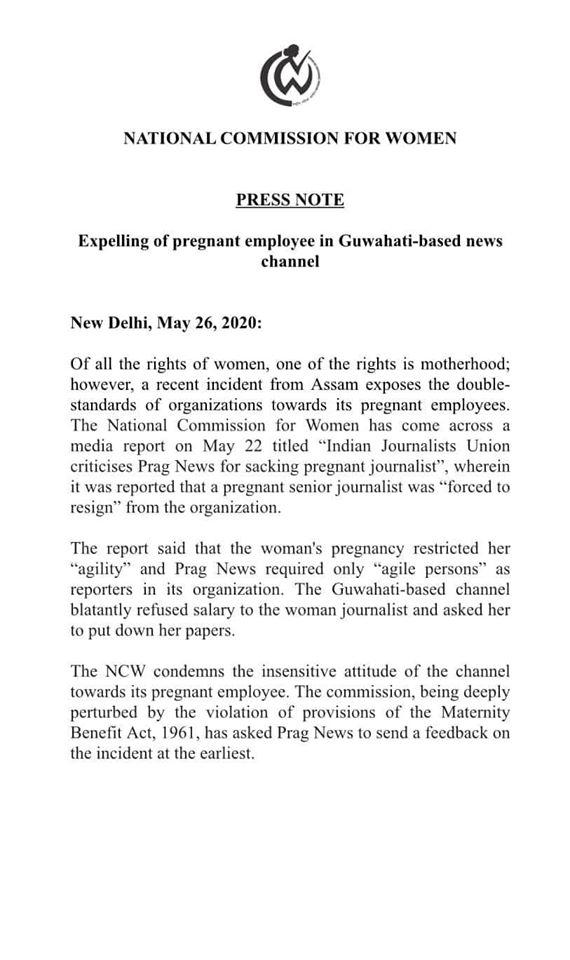 Guwahati: National Commission for Women (NCW) issues a show-cause notice to a city based satellite news channel for forcing a reporter to resign because she was pregnant. The forum also agrees with NCW that the channel management had shown an insensitive attitude towards the scribe, who worked there for over a decade.

Days back, expressing deep shock and concern ‘at the manner in which Guwahati based journalist Ranjita Rabha was forced to resign from her position in Prag News’, the Network of Women in Media, India (NWMI) called upon the NCW and the State Commission for Women to take suo moto cognizance of the issue.

Taking a serious note of the incident many senior journalists, who are not associated with local news channels, sought intervention Assam chief minister Sarbananda Sonowal ensuring justice for the scribe. JFA, along with them, believes that the incident would send a wrong signal against the recruitment of women in offices and it would finally jeopardize the campaign for women's empowerment in India.

17 May 2012 - 12:03am | Ritupallab Saikia
At the time when the state govt. is raising slogans about drastic change in the industrial sector of the state with great emphasis on establishment of Engineering Colleges, Polytechnics in every...