GUWAHATI: Chief Minister Sarbananda Sonowal said that he has urged the Centre to allow the state to continue the lock down by 2 more weeks. Addressing a press conference in Guwahati on Friday, Sonowal said that many areas in the state are still vulnerable. He further said that the extended lockdown period would help them contain the possible outbreak of more such cases following the arival of thousands of people who were remaining stranded outside the state. "We don't want to lift the lockdown right now. We need to ease it further," said the Chief Minister.

Sonowal's statement came 2 days before the end of the ongoing lock down term. In a recent video conferences, PM asked the CMs to suggest the Centre in black white. Many states want to continue the lockdown with some relaxations while some others want it to be lifted.

7 Sep 2015 - 7:46am | AT News
Allegations of rape and molestation put two political leaders in trouble a couple of months before the assembly polls.  The first one sensational allegation came to Mandira police station... 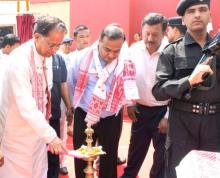