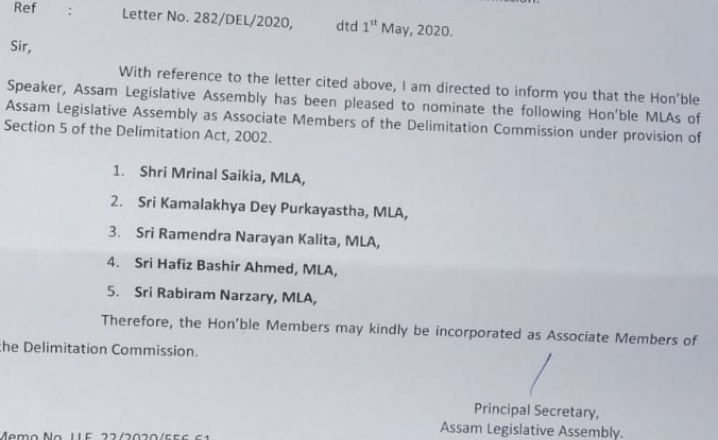 Stages are set for delimitation of assembly and parliamentary constituencies in the state before the 2021 assembly polls. State Assembly Speaker Hitendra Nath Goswami has set up a panel of legislators to be inducted in the delimitation committee.

In an official notification, Goswami named Golaghat MLA Mrinal  Saikia from BJP, Kamalakhya Dey Purikayastha from Congress, Ramendra Narayan Kalita from AGP, Rabiram Brahma from BPF and Hafiz Bashir Ahmed from AIUDF as the members to be inducted in the delimitation panel.

In fact, the process was initiated in 2009 when UPA was in power, and Assam along with a few other northeastern states were left out of the exercise after both ruling and opposition parties urged the President to exempt from the exercise. Accordingly, the President issued an ordinance to this effect. Last month the President has withdrawn the ordinance paving the way for delimitation in the state assembly and parliamentary seats.

The process, if take place will have some political ramification in the 2021 assembly polls.

5 Dec 2020 - 3:07pm | AT News
National Foundation for India (NFI) has run a prestigious media fellowship programme for several decades and this one is particularly for independent journalists. Through this programme, every...