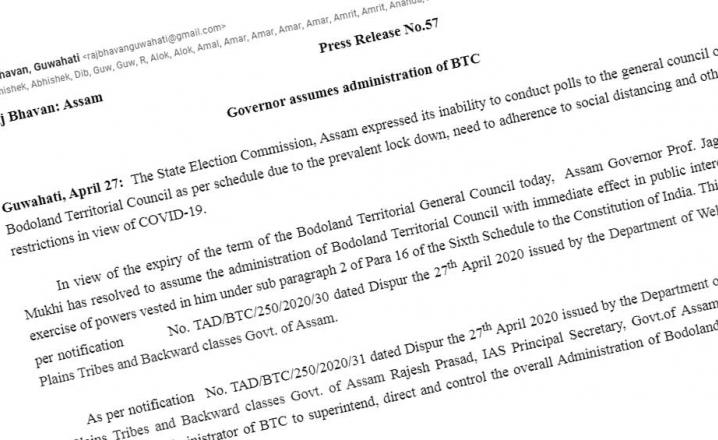 Kokrajhar: Assam Governor Jagdish Mukhi has dissolved the Bodoland Territorial Council on Monday following the expiry of its term amid speculations of a widening gap between BJP and BPF.

Raj Bhawan issued the notification in the evening declining BPF's prayer for an extension following the COVID19 menace that forced the authority to countermand the council polls slated for April 4.

BJP president Ranjit Das on Sunday said that BTAD should come under the governor's rule as soon as the term of the BPF council expires.

But BPF MP Biswajeet Daimary said that the council has constitutional provision to get the extension. But that has not happened.

Apart from BJP,  UPPL Congress and independent MP Nabo Sarania have been demanding the dissolution of the council led by Hagrama Mohilary.

20 Sep 2015 - 10:45pm | Hantigiri Narzary
The Chirang district administration is gearing up for online registration of candidates for the upcoming army recruitment rally at Tamulpur in Baksa district from October 15.To facilitate maximum...