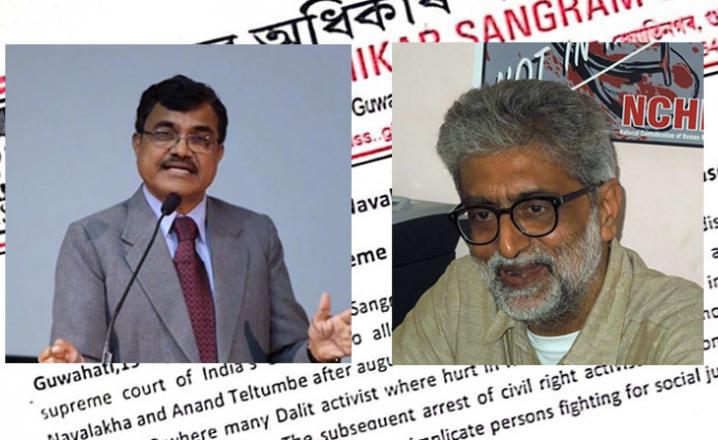 Guwahati: The Manab Adhikar Sangram Samiti (MASS) is disturbed and dismayed by the Supreme Court of India's decision to allow for the detention of civil rights activist Gautam Navalakha and Anand Teltumbe after August 14,2020. Both had been implicated in Bhima Korgoan case of 2018, where many Dalit activists were hurt in rioting by mobs supported by powerful local politicians. The subseauent arrests of civil right activists testimony to the dubious processes that were followed in order to implicate persons fighting for social justice in the Indian sub-continent.

In a press release, issued by MASS demands immediate release of the two rights activists.

Both Navalakha and Teltumbe have assisted the fight for human rights for the people of northeast India, including Assam. They have consistently opposed state violence and are part of the campaign against the draconian laws like Armed forces (special powers) Act,1958. They have been exemplary figures of commitment and determination in the fight against social injustice of oppressed peoples as well as the issue autonomy for indigenous communities across the region. The charges against them are examples of government's high handedness. It is no co incidence that they have been charge under provision of the Unlawful Activities (prevention) Act that is increasingly being used to silence dissenting India.

At a time when the government has to take stock of a pandemic of fearsome proportions and find ways to deal with the economic focus each aftermath, it saddens us to see them pursue a frivolous, vindictive agenda in state. The unjust and unwarranted arrest of Akhil Gogoi and other activists of the Krishak Mukti Sangram Samiti (KMSS) in Assam are further evidence of the kind of dangerous expansion of authoritarianism in the subcontinent. If there is one thing that public health messaging on COVID-19 has managed, is to tell us that older people with pre-existing health conditions are particularly vulnerable that count alone, Gautam Navalakha and Anand Teltumbe have to remain in their homes until the legal processes finds its logical end.

"We therefore join other democratic voices in demanding that the order to arrest the two eminent civil rights activist be rescinded at this time .we are confident that due legal process will show that the cases against them are absurd and part of a political vendetta that serves to curb", the release added.

22 Feb 2021 - 10:03pm | AT News
KOKRAJHAR:  Noted singer Zubeen Garg has appealed to the ULFA-I to release the two officials of Quippo on humanitarian ground. "Please do not play of politics on human life. People wish to...

8 Sep 2017 - 10:03am | AT News
Assam Governor Banwarilal Purohit advocated the need for integrating differently able children into the main stream of the society as they constitute a sizeable pool of human resources of the our...