Ranjan Daimary, the prime convict of the Oct'30 serial bomb blast and the chief of NDFB was released from jail today.

The dreaded leader of the NDFB was sentenced for life by a CBI special court a few years ago.

The Guwahati granted him a four-week bail for taking part in peace-talks with the Centre.

The Union Home ministry and the state government had submitted no objection certificates in the High Court.

Based on these the High Court granted Daimary bail. Meanwhile, the Centre has started peace-talks with all the fractions of the NDFB.

I will continue my writing: Brajendra Kumar Brahma 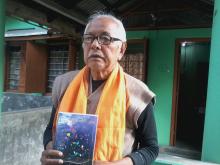 18 Dec 2015 - 2:24pm | Hantigiri Narzary
Noted poet,writer and former president of the Bodo Sahitya Sabha (BSS), Brajendra Kumar Brahma says that he would continue writing in the field of literary towards building of healthy Bodo literature...

14 Mar 2018 - 11:01am | AT News
SHILLONG: Meghalaya Editors & Publishers Association(MEPA) has strongly condemned on the high handedness of the Assam Police who mercilessly assaulted a Mizo journalist as she was covering the...
Follow @Assam Times