The Asom Nagarik Samaj has condemned the JNU mob attack happened on Sunday night which sent shock waves across the country.

Demanding independent inquiry into the horrific incident the outfit said in a press release that what happened in JNU last night is unbelievable and shocking! Even during the emergency such things didn't occur. It further said,

“This attack by ABVP goons on the students and teachers inside the JNU campus will remain a black day in the annals of higher education in India. For sometime JNUSU was agitating against the steep fee  hike which stalled the normal activities in the university. To end the stalemate the HRD Ministry and the UGC promised additional funds for the JNU.

Despite this the JNU authorities have not rolled back the fee hike which compelled the JNUSU to continue with the strike.” “ It has been reported that to break the strike the JNU VC and the ABVP jointly planned this horrifying attack on the students and teachers.

The police either joined them or indirectly supported them by looking the other way. Delhi police is controlled by the ministry of Home Affairs. So Delhi Police and Home ministry are directly responsible for this incident. There is no point asking for justice from the authorities because here defenders are the attackers.

Had the BJP believed in democracy and civility such an incident would have never happened. The situation is so grave that mere condemnation of the incident is not enough. To stall it we have to fight it unitedly. That is the call of the hour. If we fail in that it may soon spread to other campuses.”

9 May 2011 - 5:59pm | editor
To celebrate the 150th Birth Anniversary of Gurudev Rabindra Nath Tagore at Rangaloo, Nagaon in a befitting manner, Jana Sikshan Sansthan, Nagaon in association with its parent organisation Gram...

11 Sep 2017 - 9:18pm | Akshaya Pranab Kalita
The Namrup Namrup Music College is gearing up to celebrate its Golden Jubilee to mark the fifty years of establishment.Preparations are afoot to celebrate the occasion on October 7 and 8 at... 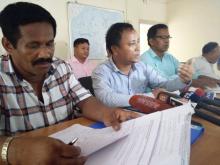 6 Jul 2018 - 10:48pm | AT Kokrajhar Bureau
KOKRAJHAR:  The small tea growers of the state have been deprived from getting genuine prices while selling green leaves due to lack of own production factories in the state.The tea growers have...