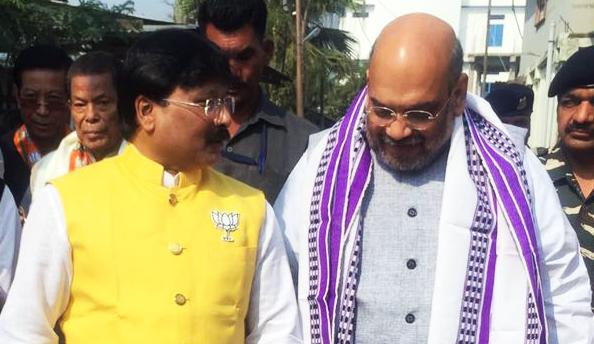 BJP leader and Chariman of Assam Petrochemicals Limited Jagadish Bhuyan announced his regisnation from the party and all posts protesting the Citizenship (Amendment) Bill, 2019.

Bhuyan joins the hunger strike organised by All Assam Students Union in Guwahati on Friday.

Bhuyan was a minister earlier during Asom Gana Parishad rule. Later, he joined BJP after facing defeat as AGP candidate.

On June 7, 2015 after stating "I have lost faith in the AGP which has become directionless and was shrinking each passing day. The BJP on the other hand is the right party to fight for the cause of Assam..." Jagadish Bhuyan along with several senior members of the AGP from Tinsukia district to join the BJP.

Bhuyan was appointed as Chairman of Assam Petrochemicals Limited by the current BJP government in Assam.

22 Dec 2017 - 5:59pm | Ranjanjyoti Mahanta
NAGAON: With a view to providing the children with a good dose of self-respect,self-esteem,to increase their self-worth and to popular 'VOVINAM', the Vietnamese Style of Martial art, the Nagaon...

28 Jul 2015 - 8:26am | AT News
A Central government team is supervising the efforts to contain the outbreak of Japanese Encephalitis.vaccination, distribution of mosquito nets, insecticides are being intensified to stop further...

21 Aug 2013 - 9:04pm | AT News
JFA demands stern action against Dabholkar assassin Guwahati: Journalist Forum Assam (JFA) has expressed its utter dismay at the killing of Dr Narendra Dabholkar, a Maharashtra based editor and...