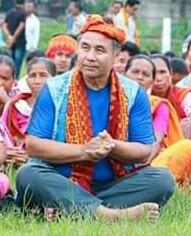 KOKRAJHAR: Noted social activist, former leader of All Bodo Students Union (ABSU) and close associate of Bodofa Upendra Nath Brahma Yamao Jwhwlao Brahma passed away on Wednesday night at a private hospital in Guwahati. Brahma was admitted at the hospital few months back following some illness. He left a son and daughter and his wife. He was 60

Brahma's body was brought to his Tengapara residence in Kokrajhar on Thursday morning and cremated at Tengapara crematorium ground Kokrajhar after performing all rituals in the evening.

Brahma contributed a lot towards the uplift of Bodo community since his student life. He was one of closed associate of Bodofa Upendra Nath Brahma during the Bodoland mass movement. He was also associated with many social organisations.

Former Rajya Sabha MP and UPPL president Urkhao Gwra Brahma while extending deep condolence on the demise of Yamao Zwhwlao  Brahma said that Brahma was a long time warrior of Bodoland movement who has gone to another world.

31 Jan 2010 - 2:56am | ThaneswarHazarika
According to delayed report poachers killed a stray rhino in Lohre Chapori of the Brahmaputra on the night of January 28 and took away the horn. In the year 2009 the park lost 67 rhinos in the...

18 Feb 2008 - 4:43am | Nava Thakuria
It may be vital for many to save the endangered rhinos in Assam's celebrated parks, but for a section of the media in the Northeast, it is seemingly more important to safeguard Assam's Forest...