Its final. The One-Dayer International between India and England will be holding in Guwahati as per schedule.

The cricket board (BCCI) has ruled out shifting the Guwahati one-dayer between India and England during the upcoming seven-match series, beginning on November 14.

The recent bomb blasts in three cities of Assam had made the schedule a doubtful one over the sixth match, scheduled for Guwahati on November 29.

Earlier a private TV channel had reported that the match may be shifted to Mohali. But a BCCI official said there were no plans to make any change in the tour itinerary. He said the tour will go on as per schedule.

13 Dec 2007 - 2:52am | editor
A Powerful Bomb has been exploded in Delhi-bound Rajdhani Express in early morning at 1 AM. 5 person have been killed and many people injured. The explosion took place between Naojan and Sungajan...

8 Mar 2017 - 4:01pm | AT News
A huge protest rally in Dhemaji has asked the government to immediately nab Soobodh Biswas, the main culprit behind the clash in Silapithar where some persons of doubtful integrity attached a local... 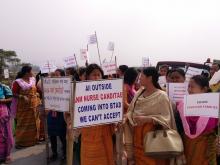