KOKRAJHAR: A new political outfit was floated in Bodoland Territorial Areas District (BTAD) at a convention held at Pathshala in Baksa district on Sunday.

In the meeting, BTAD army was also formed to work to the extensive services amongst all sections of the society.

Sarania said that the newly floated political party will work for all round development of the region.

He said that the party is planning to put candidature in all 35 seats in the upcoming BTC elections next year. 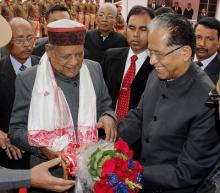 17 Mar 2011 - 9:03pm | Syed Miraz Ahmed
Constituted with more than 30 lac people the Goria, Moria, Desi communities who represent the indigenous Muslim bulk of Assam consider themselves deprived and neglected by the successors of Dispur....