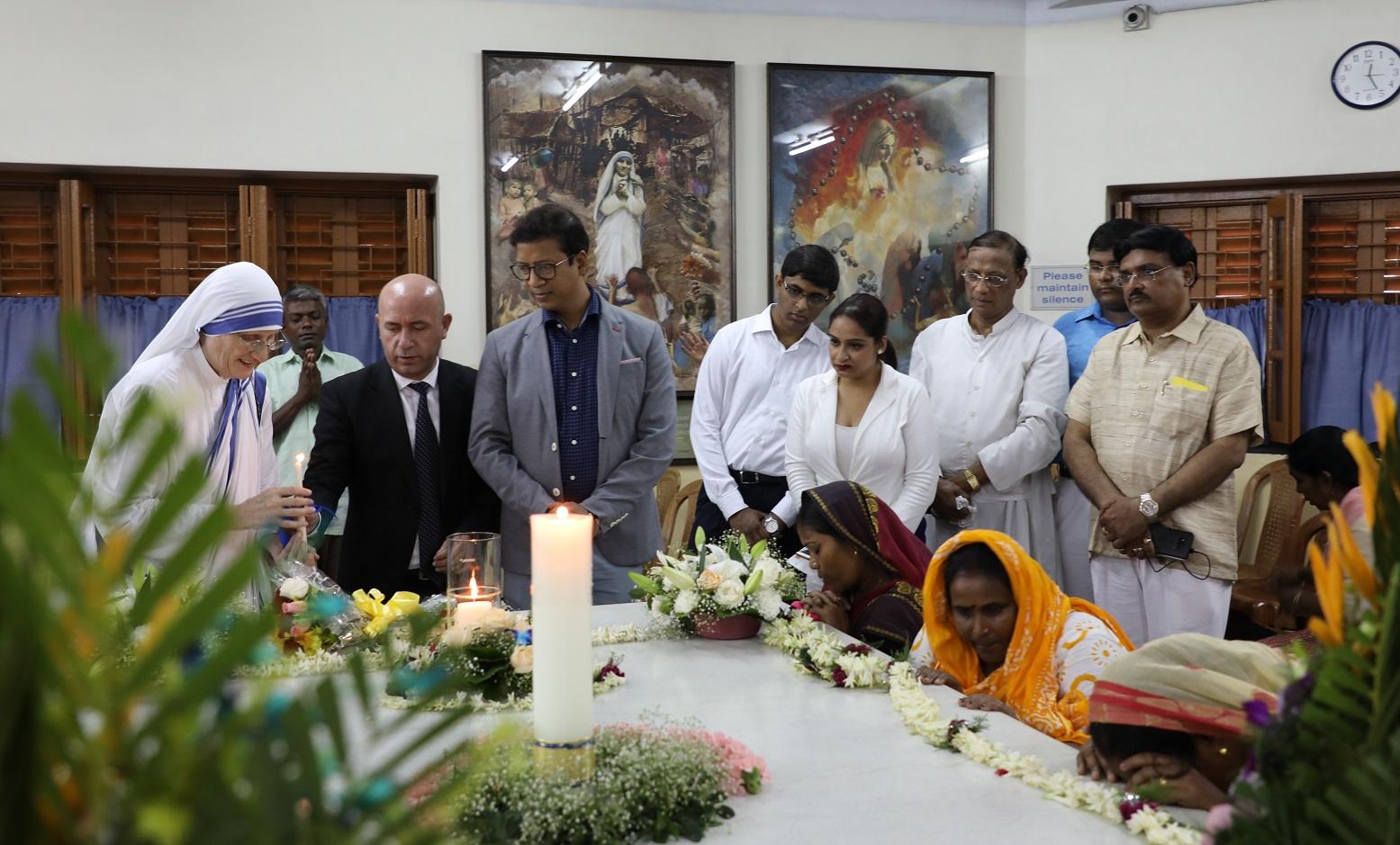 H.E. Emini was accompanied by H.E. Namit Bajoria, Honorary Consul of Macedonia in Kolkata an eminent entrepreneur and philanthropist who installed life size statue of Mother Teresa cast in bronze. It is installed at Archbishop’s House along with the life size bronze statue of St Pope John Paul II who stayed at the venue in February 1986.

On arrival at the Mother House H.E. Emini was received by Superior General of the Missionaries of Charity Sister Mary Prema Pierick and Vicar General of Calcutta Archdiocese Fr. Dominic Gomes.

“Sr. Prema personally took the team to show Mother’s room and the museum taking time to explain each artifact and afterwards took the dignitaries to the tomb where the visitor placed a bouquet of fresh flowers and lit a candle and prayed a while,” said a Kolkata youth Satrujit Ganguli accompanying the delegation.

Another Kolkata youth Parthabrato Ganguly accompanying the team added, “Sr. Prema who accompanied the visitors all the time distributed the relic and a packet containing the religious items on Mother.”

After a brief exchange of good wishes the visitor honoured the saint by making a love offering to Sr. Prema to continue her humanitarian services to the poorest of the poor.

On reaching archbishop’s house some 1 km away, H.E. Emini joined archbishop Thomas D’Souza to pay floral tribute to Mother Teresa statue installed there to mark her canonisation on 4th September 2016.

Born in a family of ethnic Albanians in Skopje, the capital city of Macedonia on 26 August 1910, Mother Teresa, whose actual name was Agnes Gonxha Bojaxhiu, arrived in India on 6 January 1929. Sr. Teresa taught history and geography for 15 long years at Calcutta's Loreto St Mary's High School.

In 1948, Sr. Teresa left Loreto Sisters and adopted a lifestyle in slums to aid the poor and the needy in Kolkata.

On 7th October 1950 at a simple ceremony at the cathedral of the most Holy Rosary in Kolkata, she professed as a Missionary of Charity Sister along with a few of her students.

Mother Teresa was awarded the Nobel Peace Prize in 1979 and died on 5th September 1997 at the age of 87. She was granted a state funeral by the Indian government in recognition of her services to the poor across the country.

22 Feb 2018 - 2:21pm | AT Political Bureau
NEW DELHI: Yet another acrimonious political controversy strikes Assam a day after Army Chief Bipin Rawat disclosed a link between AIUDF’s faster growth and influx of Muslim people in the country....

17 May 2012 - 5:38am | editor
Assam Chief Minister Tarun Gogoi has welcomed the decision of Team Anna member Akhil Gogoi to form a political party.Talking to reporters in Guwahati on Wednesday, Gogoi said that Akhil's decision to...