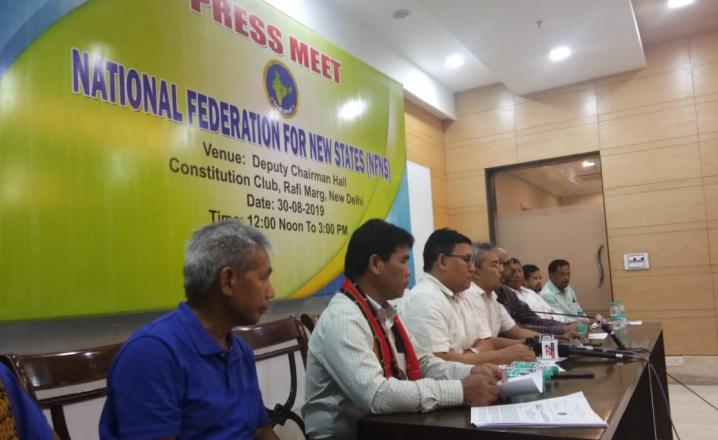 Speaking the reporters on Friday at a press conference held at Constitution Club in New Delhi, Munish Tamang, general secretary, Swapnajit Sanyal, joint secretary and Promod Boro, joint secretary of the NFNS have welcomed the decision of bifurcating Jammu & Kashmir and Ladakh by forming two Union Territories, one with assembly and other without assembly, it is of course plummeting the status of the  Janmu & Kashmir state in one hand but on the other hand making more convenience to both the region in terms of administration and rapid development.

"We hope the unabated violence and conflict will be culminated by this process of major constitutional amendment and historic decision of the government of India and there will be sustainable peace and equity in development in the valley",the leaders said.

The NFNS also urge upon the government to take care of the protection of language, identify, culture, political representation and land of the citizens of the Kashmir valley.

The NFNS remind the all pending demands of new states /smaller states as it was election commitment of BJP party in 2014 to take policy decision to resolve those issues permanently. It is also well known fact that the party isvin favour if creation of small states as per its Bhubaneswar convention of 1996.It cannot have any excuse for not creating other new states that are demanding separation from the existing once.

The NFNS believes that the manner in which the ministry of law and justice has issued the notification invoking powers under Article 370(1)of the constitution, demonstrates that union government has a political will that surmount all obstacles to its aim and vision.

The NFNS strongly calls upon the government to exercise the same political will and urgency in dealing with the other long pending statehood demands.

It is also obvious that the BJP party has sufficient majority in both the houses to create new states/union territories. The previous reason for not creating separate states due to its procedural requirements which is cumbersome is also now not available as has been shown by the BJP. However, the present exercise gives an impression to the common man that only if there is terrorism and violence, there is a compulsion to create new states /union territories and they are so created. This sends a wrong signal and could encourage violence in parts where small states are demanded. It was well accepted fact that the basis for creating new states/union territories had been to help people to live with dignity, to protect their language, identity and culture and also to make their happier life and more fulfilling lives.

Therefore, it is the time that government should initiate the process for creation of such other states that bring out better distribution of resources and opportunities and also properly implementation of the Article 14th of the Indian constitution. It is the time to provide justice after 72 years of Independence to the people of these regions who has been deprived from many constitutional rights, inequitable governance and development.

"We appeal the centre to make policy decision without delay to create those new states and make these regions also felt the essence of sabka saath sabka vikash  and sabka viswash as stated by respected Prime Minister Narendra Modi",the NFNS leaders added.

Poet and lyricist Tafajjul Ali passes away at Bokul Tol

6 Jul 2008 - 3:19am | editor
Noted writer and poet Tafajjul Ali is no more to seek the fragrance of Bokul ful and thereby to command appreciation from all section of the people. He breathed his last on Saturday at his beloved...