‘Dignified way for return of Kashmiri Pandits obligatory’ Guwahati: The return of Kashmiri Pandits to Kashmir valley must be addressed in terms of historical aspect than a cosmetic contemporary understanding. This community has suffered a genocide for last 700 years and has been eventually reduced from cent percent presence in the valley to hardly three percent now, commented a senior journalist of Jammu & Kashmir.

Tito Ganju, editor-in-chief of Epilogue, an English newsmagazine published from Jammu, while interacting with Guwahati Press Club member-scribes through the video-conference facility on 23 August 2019, also added that safety, dignity and opportunity should for the cardinal of any policy on return and rehabilitation of those evicted Pandit families.

Replying to queries on the successful return of Kashmiri Pandits to the valley, Ganju however commented that time and situation are yet to be conducive for their return. Though Kashmiri Pandits are the aboriginals of the valley with first and uncontested claim over the resources, their demand for a centrally administered region carved out of Kashmir Valley should be acknowledged, he asserted.

Recognized as an expert on the Constitution, Ganju categorically pointed out that the government had the legal and constitutional mandate to deal it with the manner it deems fit. Jammu & Kashmir was under President’s rule and hence the legislative power of the State in accordance with the constitutional provisions lied with the Parliament and the Centre took the route of Parliament to bring in the bill to make necessary changes in Article 367 and Article 372.

Narrating the political history of Jammu & Kashmir, Ganju claimed that J&K Maharaja Hari Singh had all moral, ethical and legal rights to decide upon the accession of Jammu & Kashmir with either dominions (India and Pakistan) and the king duly signed the treaty of accession with Indian Dominion on 26 October 1947.

J&K Maharaja was seeking a better deal with both the Dominions before finally making its mind. The unwanted aggression of Islamabad through Pakistani Army regulars and tribal forces into the erstwhile province of Jammu & Kashmir later compelled the king to seek assistance from New Delhi and eventually he signed the Instrument of Accession.

Talking about the petition filed by India in the United Nations after Pakistan’s aggression, Ganju made it crystal clear that it was strictly on the aggression of Pakistan into Jammu & Kashmir, which had already become a legal territory of India following the official consent of J&K Maharaja.

Adding further he revealed that the Centre till date was pampering the separatists of Srinagar valley through a kid glow treatment prostrating interest of the nation and the supremacy of its Constitution to the whims of Kashmir region. The nation-state over 70 years now unfortunately incentivized separatists including the so-called mainstream political parties of Kashmir region and ultimately continued penalizing the nationalists of the region.

4 Feb 2014 - 4:42pm | AT News
A local court in New Delhi on Tuesday sent the three miscreants accused in the murder of Nido Tania to jail hardly 24 hours after they were arrested.But that’s not all. The north east students in the... 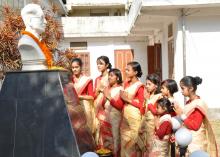