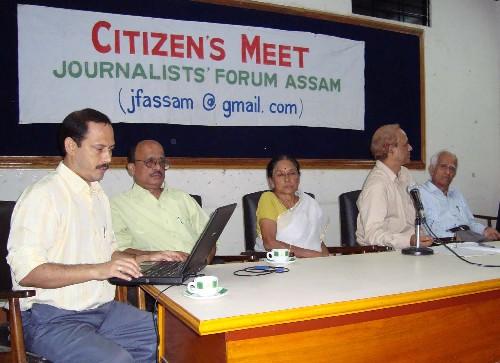 Terrorism is threat to democracy and humanity. And the terrorists have no caste and religions-the speakers of a Citizens' Meet at Guwahati Press Club today came out to these conclusions. Organized in by the Journalists' Forum, Assam, the meeting also emphasized that the authority must take responsibility and ensure the safety of the people of the State.

Addressing the gathering, Nirupama Borgohain, a Sahitya Academy award winner littérateur insisted that the government must be pressurized for actions. The government has the legitimate power to serve the country and save its citizen, Borgohain asserted. Talking about the United States of America, which has dealt with terrorism after the September 11, 2001, she raised the question, why India can not do that.

DN Chakrabarty, the former editor of Dainik Asom, expressed resentment that while Assam faced the terror attacks on October 30, the disaster management programme shoed its utter failure. He also praised the people of Assam for exercising patience during the crisis. At the same time, while appreciating the media for their retrained roles, Chakrabarty also appealed the media persons for comprehensive study of terror attacks in the country. The meeting was also addressed by Prof Abdul Mannan, Bhadrakrishna Goswami, Anjali Daimary, Abhijit Sharma, GS Kalita with many others.

In fact, the virtual capital of Northeast, Guwahati turned into a city of protest and demonstrations on the aftermath of the serial blasts. The terror attack that struck Guwahati and three other places of Assam on October 30 morning snatched away the lives of over 80 people. The civil society and advocacy groups have already taken various agitations to condemn the incident that left nearly 400 people injured. If one organizes public meetings, the other went on with candle light processions in the streets of Guwahati. If a section preferred for the street corner prayers, other went for comprehensive discussion on the issue of terrorism.

Assam or Northeast is not stranger to terror attacks, but the recent series of explosions that took place in the state had shaken the psyche of the people. For the first time, they feel helpless and in-secured. Dances of death gripped the ambience and the citizens of Guwahati went on self imposing curfew for many hours. After the historic Assam agitation, one witnessed such a deserted Guwahati for the first time. Shops closed, no vehicles with crowd on the roads and unbelievable silence grabbed the ambience of the city.

AASU all out against ASEB

29 Aug 2014 - 5:14pm | Dibya J Borthakur
The Raha unit of All Assam Students' Union ( AASU ) has expressed deep concern at the development centering round the transferring of all consumer relating official works of Raha ASEB office to...

6 Feb 2014 - 3:48pm | AT News
Congress legislators are holding a crucial meeting along with their BPF counterparts in Dispur to discuss the Rajya Sabha polling slated for Friday.The senior legislators are believed to have been...