Kokrajhar: Former BTC member of council legislative assembly (MCLA)  Rajendra Narzary passes away on Sunday around 2.30 pm at a private hospital in Guwahati.

His body is being brought to his native place in Gossaigaon.

He last rites will be performed tomorrow.

He was also associated with several organization in the area. 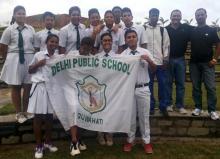 4 Nov 2013 - 4:40pm | AT News
The Assam government on Monday has announced an ex-gratia grant of Rs 6 lakh to the next of kin of the deceased and free medical treatment for the injured Gendamari. Six killed on the spot while...