Kokrajhar:  A massive fire has gutted  at Dadgiri Bazar along the Indo-Bhutan border in Chiang district.

The fire broke out  due to cylinder explosion at a hotel that engulfed to the nearby shops. 11 shops were destroyed in the fire.

The incident took place by 3.30 am in the early morning on Saturday.

Nearly 7 lakhs worth of properties reportedly destroyed in the fire.

8 Dec 2017 - 11:24pm | AT News Imphal
Manipur Chief Minister N Biren Singh  told Union Home Minister Rajnath Singh that the Naga peace pact should not disrupt the age-old oneness of the state in the ongoing efforts to end the Naga... 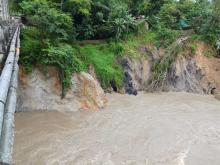 29 Jun 2018 - 11:36pm | Akshaya Pranab Kalita
NAMRUP: The heavy rainfall and the increase in the water level of river at Namrup in Dibrugarh district has posed serious threat to the local residents in the area. The continous downpour has gripped...

16 Dec 2008 - 9:52pm | editor
Culling operation in Assam has completed in three areas of two districts on Tuesday where the killer avian flu is creating panic. According to information, the number of birds culled so far reached...