In yet another deadly attack Naga rebels killed 2 soldiers in Mon district on Saturday.

The incident took place at Tobu in Mon district of Nagaland at 1.45 in the afternoon where 2 Assam Rifles jawans died on the spot and 3 others sustained serious injury.

According to reports, as the soldiers reached Tobu the rebels were hiding on the roadside lobbed a powerful grenade at the vehicle and this was followed by indiscriminate firing.

The rebels fled from the spot before the arrival of army, police and para military forces. The injured have been shifted to the hospital.

A massive combing operation is in progress to apprehend the rebels.

The incident took place hardly a week after the Armed rebels killed NPP MLA Tirang Aboh along with 11 others at Bogapani in Arunachal Pradesh.

11 Mar 2014 - 11:47pm | Nava Thakuria
As the nation prepares for the next general election, Journalists' Forum Assam (JFA) has urged all political parties to show their sincerity towards the implementation of various welfare schemes to... 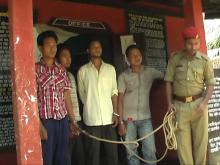