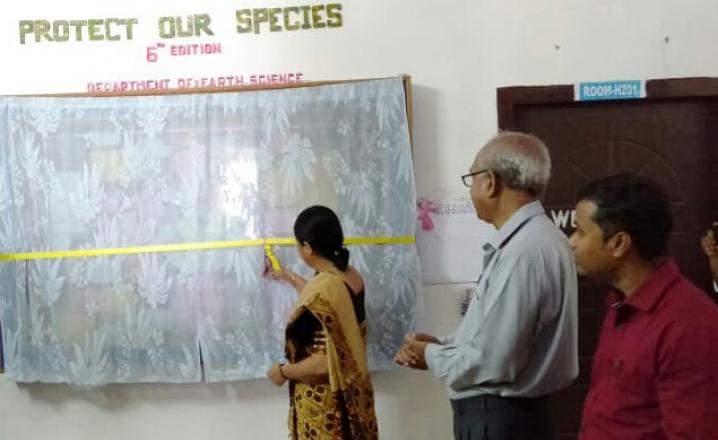 “The idea behind celebration of World Earth Day was to create awareness about the need for preserving and renewing the threatened ecological balances upon which all life on Earth depends. However, that idea remained confined to a handful of population around the globe. As a result of which an average of 60% of the population of fish, birds, mammals, amphibians and reptiles have dwindled in between the celebration of the first World Earth Day in 1970 to 2014,” said Mubina Akhtar, noted journalist and wildlife activist, while speaking on this year’s World Earth Day theme “Protecting the Species” at the NKC Auditorium, University of Science and Technology, Meghalaya, organized by Earth Science Department.  “An incalculable number of species have disappeared forever, and a large number are threatened with extinction. In Assam, 14 species--comprising seven plant and seven animal species--have now become threatened that includes the siya nahar, lady’s slipper orchid, Cycas and animal species like Assamese day geck, tokay gecko, black soft-shelled turtle etc.  In almost all cases, the threats to wildlife can be traced to human activities. Habitat destruction is the main cause for wildlife extinction in India” she said and added “When the natural habitat of animals is destroyed, it leads to a decline in their primary food supply. With loss of breeding and nesting grounds, their numbers get drastically reduced. In the case of plants, if their natural habitat is destroyed, then their survival is at risk.”

“We depend on various plant and animal species for livelihood support but unsustainable use has led to rapid decline in those species. We tend to forget that ‘each species is unique and has been created as a consequence of evolutionary process. Therefore every species has a natural right to exist.’

Akhtar appealed to the students for a more active and defined role in creating awareness for preservation of natural ecosystems as she released the 6th edition of the Department’s Wall Magazine dedicated to this year’s World Earth Day theme “Protecting the Species” on the occasion.

The programme started with welcome speech by Dr. E. Al Huda Head of the Department of Earth Science.

The Vice Chancellor, USTM, DR. P.K. Goswami in his speech also referred to human interventions that led to imbalances in nature and the urgency need to preserving the same. Dr. R.K. Sharma, Adviser to USTM detailed on the history of events that led to the celebration of World Earth Day.

21 Mar 2009 - 11:31pm | Monjib Mochahari
Continuing violence against infants, girls and women are being reported on a daily basis makes me feel that India is suffering from female-hatred mania. In the last couple of months cases of rapes...

30 Jul 2015 - 8:08am | AT News
Are you waiting to visit Dhemaji comfortably unlike the journey by bus? Days are not far when you will be able to reach the distant district by train. Courtesy Northeast Frontier Railway....