JORHAT: The toll in the spurious liquor tragedy refuses to halt even after the loss of nearly 200 people in Jorhat and Golaghat districts forcing the government to launch a massive crackdown against the illicit liquor traders.

According to information, at the Jorhat Medical College Hospital alone 97 deaths have been reported since Friday night and all these people were rushed from Salamira and Titabor areas. Others died in Golaghat civil hospital. A few other patients died without treatment at the Salmira Tea Estate on Sunday and Monday.

My statement to @republic on the hooch tragedy that took lives of 80 person in Assam and many admitted in Hospital. The Govt is fully responsible due to lack of supervision, improper implementation of excise rules and large scale corruption in Excise, Police and Administration. pic.twitter.com/ciRqPaMWRQ

Meanwhile, local residents in the worst hit Slamara and Borhola have raided excise minister Parimal Sikhlavaidy as he was on a stock taking visit on Sunday demanding immediate ban of liquor across the state. 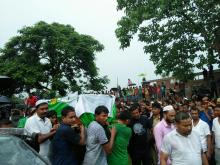 3 Aug 2017 - 8:16am | AT Kokrajhar Bureau
Amidth huge thronging from all walks of life funeral of Lafikul Islam Ahmed, president of the All BTC Minority Student's Union(ABMSU) was performer at Salakati in Kokrajhar district on Wednesday....

22 Nov 2017 - 6:51pm | AT News
GUWAHATI:Veteran actor Biju Phukan is dead. He was 70. Phukan, the doyen of Assamese film world suddenly died of cardiac arrestin the afternoon. According to information, Phukan, who was not...

18 Jan 2012 - 11:54pm | Anup Arandhara
The third establishment day of Moran Sahitya Sabha will be held at Kushal Nagar, Moran on january 29. On this occasion the fine-arts, debate and essay competitions for students are being organised...