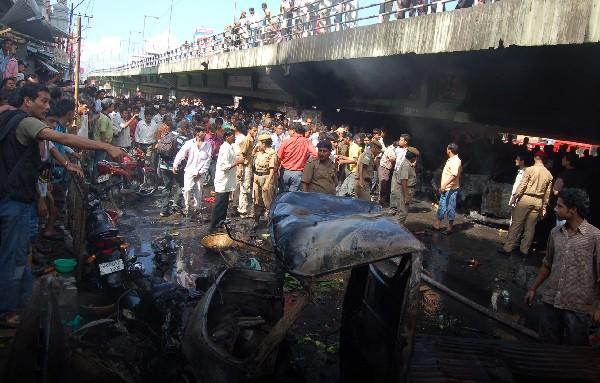 Why terrorism in India is uncontrollable? It is because our civil society does not have guts to protest really. We, rather all encourage it! Never our Government have been able to motivate people to stand together firmly against human rights and human values. In fact, at times, the some Government directly or indirectly encourage violation of human rights. Neither our government, nor our parties nor our institutions & clubs have taught us how to value human life!

In Assam, terror struck this morning. Many people died. Every news channel have reported the matter. Almost all the news channel have beamed the episode with vivid description. But no channel have devoted enough time to condemn it & to encourage civil society to stand up against it. Reporting the matter repeatedly is one thing but discouraging the terrorism is another responsibility. The vivid show of terrorism is not enough. It is necessary for the media to devote enough time to discourage the event too. The terrorist have liked the flash of news. They need publicity. Whether it is mujaheddin, Ulfa ,ISI or any group from any other country all get encouragement when mass publicity is received instead of mass protest in unison. Actually our own society is to be blamed for recurrence of terrorism in our society. In a Strong civil society that value human dignity terrorism can not flourish.This is for the first time there were huge protest by people at Ganeshguri. People felt tired of bomb blasts and inaction of the Government.Where was the disaster management team? After blasting the first bomb it took twenty minutes to blast another in Ganeshguri. Why disaster management team could not warn all the market areas of Guwahati by that time? whose failure was that . Is there no disaster Management team in Guwahati? Sorry, It is unacceptable that even in twenty minutes time disaster management system could not be put into action! Civil society gets the government it deserves. Like our most citizen our government is also timid and weak.

Our Chief minister is a clean and honest persons. He earned many feathers to his credit during last few years. But his performance in yesterday's press conference was dismal! A friend of mine told me that our CM could not even articulate his thoughts. Rather he was more keen to conclude his conference. It is understandable that when city was burning CM need not get bogged down with press. Yet, he should not fumble publicly while articulating his thought. In today's situation, as my friend suggested, a clean and honest Chief may not be required. Today you need a person of Guts who can lead the disaster management team from the front. My friend even suggested that with so much achievements in the past why the CM is wasting his time in the office. Rather like Lal Bahadur shastry he can voluntarily seek retirement and make a name for himself.After all what every person seek in life after a successful career ? The fame for his life! CM can earn fame by owning up moral responsibility of the failure of disaster management team and make a hero out of himself.later he might be able to occupy the position of chairman of lok sabha,, a Governor or a vice president, which are more administrative than statesman like position. The view of my friend is of course the expression of the frustration of citizens for the inept handling of the situation on terrorism. Perhaps his sudden departure may not stop terrorism but would revive value based politics in the society.The most admirers of his have asked where has Tarun gogoi of past gone who dared to resign, from the union cabinet in a matter moment, without even verifying with prime minister?

More than fifty people died in today blasts. Much more would die here after because there is no mechanism in our civil society to blame and discourage the terrorism. Similar was the situation in Europe once upon a time. It was the same condition in USA too. But it is not only government's efforts. More importantly civil society in those countries roared against terrorism. Today none can think of creating terror in Europe effectively. Why? Because citizen have built defence mechanism. Can we not build up the defence mechanism, against terrorism? There is almost no terrorism in New Zealand and in Australia at all ! Why? It is because of the self esteem of the citizen. The civil society doe snot encourage it at all. It is because citizens of the country, irrespective of economic division, want to live a contented life. They want to honour & value human life.The Day Indian would think as one nation and start honouring its own self there would be no terror in our country.

The terrorism would not be contained in Assam nay in India . It would comeback again and again so long as civil society fail to motivate itself in looking at people with a divisive mind of caste , creed and religion. Today fifty odd people died in Assam.Tomorrow 100 people would die in Kashmir , day after it would be in Hyderabad.

Indian are making politics out of the terrorism. Every subgroup has its own agenda. We are not a Nation but bunch sub nations having our own motive to look after our own selfish interest. Do we really want terrorism to end? Never ! Like flood, natural calamities hunger we really welcome terrorism in our heart but verbally we preach peace. We make politics out of human weakness. What a nation we are. Can we be a great nation? never! Shame on us!

Permalink Submitted by Dorika on Sun, 02/11/2008 - 21:51
Why Assam is the Best State in the World for Jihadi Attacks? Often we question why Europe, Australia etc face far less or no terror attacks. That is because Religion does not stand as a barrier to drag out terrorists. India has no State Religion unlike US, UK, Europe etc. Being a so called 'Secular' country, the Vote-Bank Politics has come to stay in modern day India. Especially in Assam, where the fate of politicians in elections is decided by Muslim immigrants from Bangladesh, the administration and the Government never utters the word 'Islamic Terrorism'. This pattern of Democracy is unique to Assam and India. However, the police and the government in other Indian states are less corrupt and alert when compared to Assam (Assam being 'ranked' as the most corrupt state in India). Also, vote-bank politics is not as high as in Assam. .........As such, Jihadis have a field day in this State of India.

Permalink Submitted by Jahnabi Barooah on Mon, 03/11/2008 - 13:51
Hey Dorika, Appreciate your views. But please refrain from throwing around the word 'Jihad' so casually. Jihad is a very sacred word for Muslims and you are not using it in the right manner. Jihad is a struggle to the path of God. Terrorism has nothing to do with Jihad and those who indulge in terrorist activities are not Jihadis.

Permalink Submitted by DILBAG RAI on Mon, 03/11/2008 - 17:32
Sir, I read your views in the thought provoking article. With the claims of the Maharashtra Police that some Hindu extremists were involved in the string of blasts that took place in Malegaon and Modasa last month, the worst fears of many have been confirmed. India, under the present UPA dispensation, is witnessing a paradigm shift with a nation that looks increasingly divided and caught in the triangulation of Islamic terrorism, Left-wing Naxalism and now, if confirmed, Hindu extremism. How things have come to such a pass can best be answered by the manner in which the UPA Government has chosen to address the issue of internal security and also mortgage the country's very future in the hands of those who are unable to check the rise of three forces of extremism that are increasingly plaguing and terrorising the country. Politicisation of terrorism and the pandering of pseudo-secularist ideologies, within and outside the Congress, have ensured that terrorism, considered an idea foreign to India, has now become home-grown and increasingly sophisticated The Government's wishy-washy approach to terror has resulted in lost lives and chaos in the country. Country,s security as well as the unity is at stake. The utmost need of the hour for the political leaders in power and in the opposition is to rise above the party politics and to have serious thoughts to have consensus to combat terrorism . All should stand like a body to face it and to save the country from the chaos and its people from the onslaughts of the terrorists.Thanking you. Yours Truly, Dilbag Rai CHANDIGARH

Permalink Submitted by Dorika on Mon, 03/11/2008 - 20:33
Hello Jahnabi Barooah, Terrorists might not be Jihadis, BUT, Islamic terrorists think they are Jihadis.

17 Aug 2015 - 8:29pm | AT News
Chief Minister Tarun Gogoi on Monday suggested a slew of measures to the Centre to expedite the process of development of the state. Talking to DoNER minister Jitendra Singh in Guwahati, Gogoi...

31 May 2010 - 1:26pm | DigantaTalukdar
Nabarupti Silpi Sangha, a cultural organization of Nagaon organized the 20th Celebration of Bordoichilla Bihu Utsav on May 28, 29. In connection with the celebration, Bordoichilla Borbihuwati 2010...

One electrocuted in Kokrajhar

21 Jun 2017 - 8:07pm | AT Kokrajhar Bureau
A person was electrocuted near Kokrajhar bazaar this evening in Kokrajhar town. He was identified as Ekramul Mondal(42) of Bilasipara in Dhubri district. He was engaged as dhalai labour at a...

Memoir of a forgotten Indian - American from Assam
Ranjan Das: Wizard of Corporate Sky
The interim budget belied mass expectation
Is it correct to debar Satyam employess from employment
How boys from Assam would tackle job loss in time of recession
Are we passing through an era of darkness?
Hail Obama as the leader of the new world