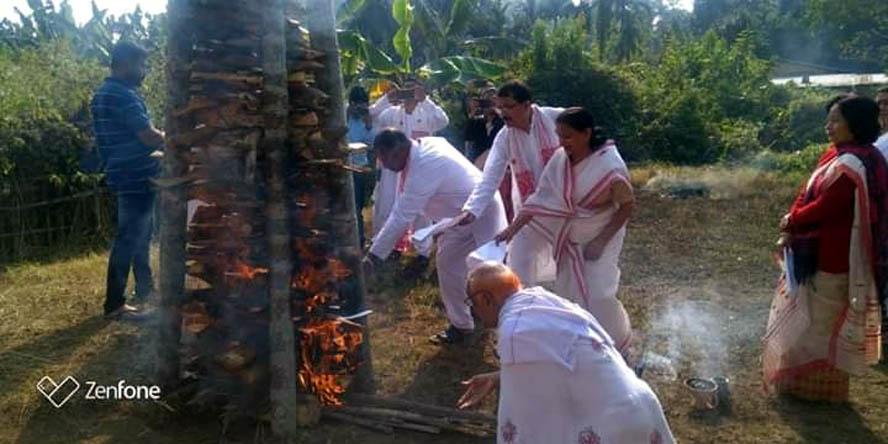 Traditional bonfire and feasting were accompanied by widespread protest against the Citizenship (Amendment) Bill, 2016 in the length and breadth of the state from Monday evening.

The anti Bill protest dominated the festivity as folks in the rural and urban areas vowed to vehemently oppose the Bill that promises citizenship to non Muslim neighbours who intruded into the country from Pakistan, Bangladesh and Afghanistan to escape religious persecution till December 31, 2014.

Senior Congress leader and former Chief Minister Tarun Gogoi on sharpened his predecessor Sarbananda Sonowal and called him the weakest of all the Chief Ministers.

Talking to reporters in Guwahati in the sidelines of the Bihu celebrations on Tuesday morning, Gogoi said Sonowal lack courage to oppose the Bill.

“Sonowal can’t take any decision. He is being controlled by Himanta Biswa Sarma and Chandra Mohan Patowary,” said Gogoi who vowed to resist the NDA government the move to ensure smooth passage of the Citizenship (Amendment) Bill, 2016.

In a related development, KMSS leader Akhil Gogoi along with his followers from 70 other organizations have completed 24 hours hunker strike in Guwahati in protest against the Citizenship (Amendment) Bill, 2016.

The folks on Monday night opposed the Citizenship (Amendment) Bill, 2016 by throwing the copies into the bonfire after they had harvest feast amid low profile celebration of the much vaunted festival.

21 May 2016 - 10:55am | Shajid Khan
The Udalguri district which is infamous and in headlines in recent times for the highest casualties in Asia resulting in the Man-Elephant conflict has another wild jumbo separated from a herd which...