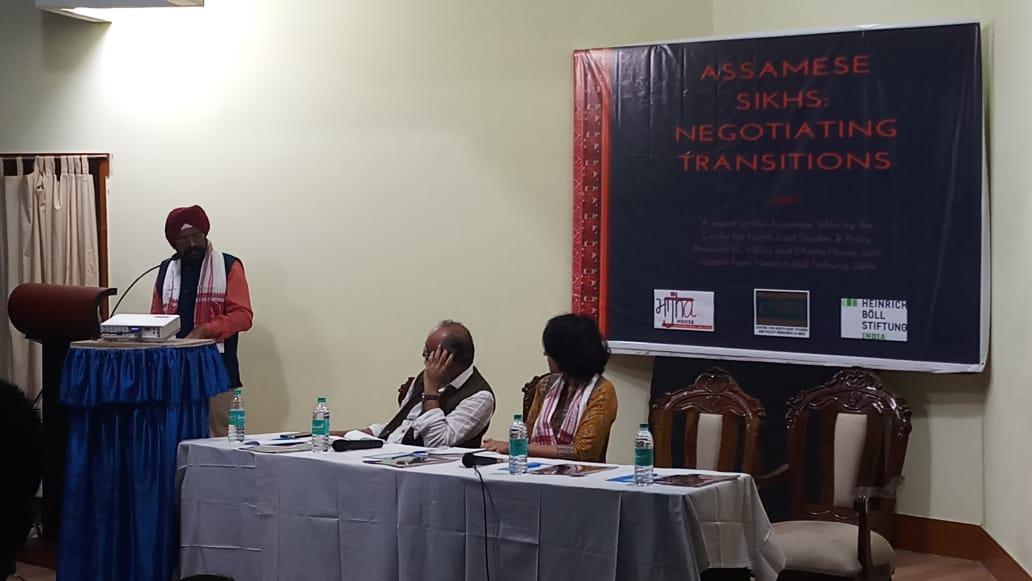 Guwahati: The Centre for North East Studies and Policy Research (C-NES) organized a panel discussion on ‘Assamese Sikhs in Transition’ a research project which has been prepared in collaboration with Majha House and supported by Heinrich Boll Stiftung (HBS).

The Panel which was held on 27th November 2018 at the Kanaklal Baruah auditorium of Assam state Museum, Guwahati. The spirited discussions were led by  Manjit Singh, Sikih litterateur and leader from Assam, and also included presentationw by  Niyati Singh, The project Coordinator and on Skype by  Simran Kaur, the researcher in Punjab. Majha House is a newly formed Trust in Amritsar for creative arts, research and literature.

Sanjoy Hazarika made opening remarks and provided a background to the report on what he called “efforts to build bridges between the North East and North West”. A similar presentation was made in Amritsar on November 18 to many Sikh scholars, cultural leaders and senior leaders of the city.

Manjit Singh critiqued the report for bringing the Shillong Sikhs into the project saying that was a ‘different history’. He also had a concern about the phrase ‘Assamese Sikhs’, saying it could be the Sikhs of Assam. He gave a detailed history of the Sikhs in the state saying they were ‘Sikhs and Assamese’ not Punjabi. His remarks were met with a good response from the audience.

In the question and answer session, Hazarika outlined the rationale for including the issue of Mazhabi Sikhs in Shillong. The ensuing discussions were vigorous and saw differences emerge about the status of different Sikh groups in the state. Members of the audience included local Sikh leaders, media academics and CSOs.

Manik Boruah, Associate Programme Manager of C-NES introduced the programme while Chok Tsering of HBS explained the goals of the German foundation and its association with various projecta in the North East.

5 Feb 2015 - 10:31am | SK Hasan
The Nazira Press Club in association with the Freelance Journalists' Association of Nazira organized a programme on Wednesday in an effort to interact with all the municipal candidates who are...

5 Mar 2016 - 9:19pm | AT News
The Director of Sports & Youth Welfare is going to organize Assam Sports Festival on March 9, 2016 with a daylong programme in 27 districts head quarters followed by a state Level Sports Day in...