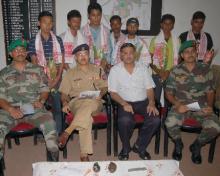 8 May 2008 - 10:16pm | editor
Seven cadres of 27, 109 and 709 battalions of Banned outfit ULFA have surrendered before the deputy Commissioner (Kamrup) RC Jain and Superintendent of Police Debajit Hazarika at the Office of Deputy...