4 Jul 2010 - 2:26pm | mridulburagohain
The historic and a front line educational institute of Sivasagar district Nitaipukhuri Hamchandra Dev Goswami College has observed its 45th of Foundation Day on July 1. In this occasion, various... 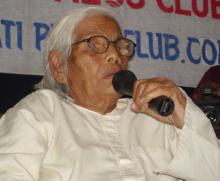 Guest of the Month: Adya Sarmah

26 Mar 2008 - 11:00pm | editor
Renowned artist "Guruji" Adya Sarmah addressing the media people in a press meet during the "Guest of the Month" programme organized by the Guwahati Press club at the press club...