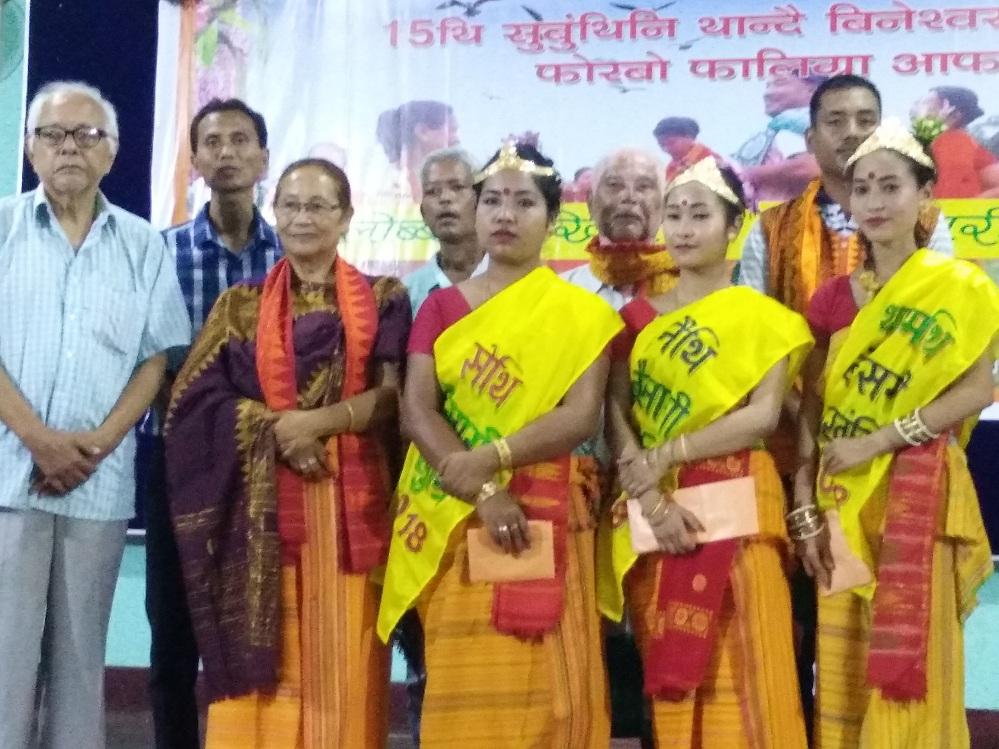 Priya has been achieved the Bwisagi Khungri award defeating Tinu Basumatary and Jeni Narzary of Kokrajhar town, who were adjusted first and second runners up in the Bwisagi Khungri contest respectively.
Bwisagi Khungri Priya was awarded a golden crown and cash Rs. 10,000 while first runners up was awarded cash Rs. 8,000 and second runners up Rs. 5,000 along with trophies respectively.
The Rongjali Bwisagu Pwrbw was concluded on Sunday with two programme scheduled at Science College auditorium in Kokrajhar,which was organised by Kokrajhar Rongjali Bwisagu Pwrbw Paligra Afad. Assam forest minister Pramila Rani Brahma graced as chief guest on the prize distribution ceremony and handed over the awards. She participated in the Rongjali Bwisagu celebration in Kokrajhar and offered her Bwisagu Dance along with Bwisagu troupes that created amusement and cultural entertainment.

The school management committee of the UN Academy,Kokrajhar has also organised Rongjali Bwisagu Pwrbw with daylong programme scheduled at the school complex on Sunday. Huge peoples from all walks of life participated the Bwisagu pwrbw celebrations with  traditional music instruments like Kham, Shifung, Jota etc which saw huge amusement.A cultural rally was also  carried out in Kokrajhar to mark the Bwisagu celebration followed sappling plantations at Bhatarmari LP school on the occasion World Mother Earth Day observation in Kokrajhar.
Priya Brahma, a young dancing talented(who is now studying in degree six semester in Kokrajhar Govt College)  has been honored with Bwisagi Khungri award after her third time attempted in her life. Brahma consecutively participating the dance competition since 2016 till date. She was adjusted third in 2016, second in 2017 and this time (2018) achieved Bwisagi Khungri Titled through thorough showcasing of dancing talents.

“I am getting very much happy as me today got Bwisagi Khungri tittled during the Rongjali Bwisagu festival celebration.I am a student of six semesters in degree course and a small dancer in my locallity. I think, this time my lucky has been brightened up as my name has been figured in the grand finalist. It is my third time attempts that was seen achieved today’, Priya Brahma said.

6 Jul 2014 - 6:41am | AT News
The overall flood situation starts improving on Sunday following the halt of rains in the catchment areas of Arunachal Pradesh. The water level of the Brahmaputra and its tributeries are gradually...

1 Apr 2015 - 10:50am | AT News
NDA came to power after it promised every possible measures to end the immigration problem confronting Assam for decades.But the promises seem to have been remaining only in the papers. Even the...

9 May 2014 - 4:38pm | Jayanta Kumar Das
When other three districts in BTAD, namely- Kokrajhar,Chirang and Baksa had been hit hard due to post poll violence leading to deaths of nearly fifty innocent people including children and women...